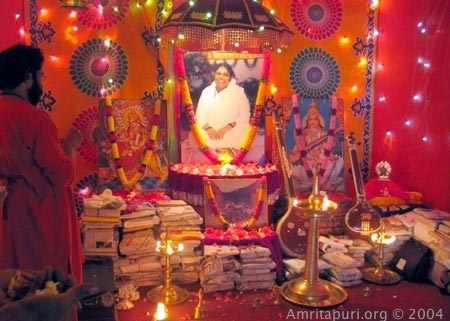 Vijaya Dhashami was celebrated in Amritapuri on 23 October 2004, Amritapuri

In the early hours of the morning, Swami Turiyamritananda Puri offers puja to the books and instruments kept at the feet of Devi. After the puja, everyone starts their study and work anew, praying to Saraswati, the Goddess of Learning, for knowledge and wisdom.

Students bring their study books for the puja, while the elders bring tools or instruments that they use for their livelihood. 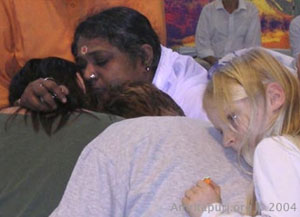 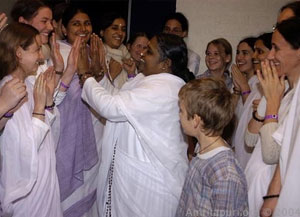 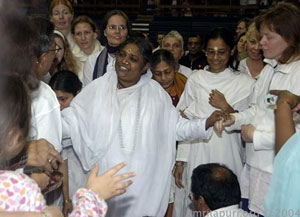 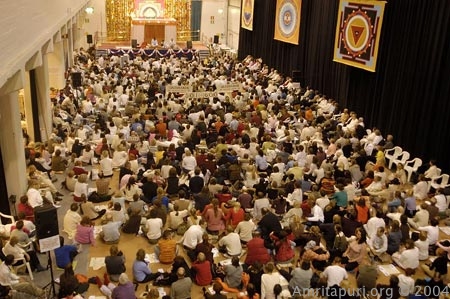 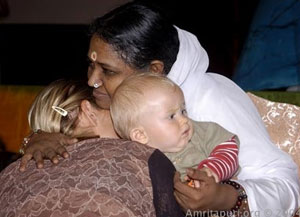 At last, the day of Amma’s arrival on the continent! A group of devotees gathered at the Kloten Airport near Frauenfeld on October 5th to welcome Amma. She appeared in Her white sari, with a beaming smile, giving darshan and distributing sweets to Her children. 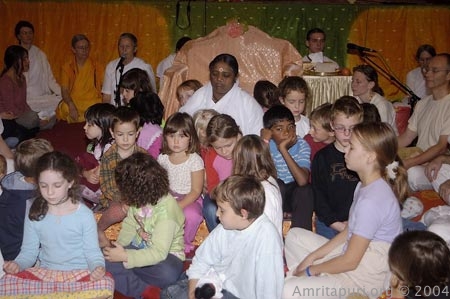 The programs in Switzerland always have a calm and relaxed atmosphere.

To the delight of Her German-speaking children, Amma sang “Srishtiyum Neeye” in German and then sang an English bhajan next. Some commented that seeing so many smiling faces in one place was a rare sight.

A German bhajan group, with keyboard, flute and bass guitar, gave a lively performance with bhajans they had translated into German. Devi Bhava finished at seven a.m. with a beautiful rose-petal shower by our Divine Mother, who stood with a beaming smile in a blue sari. 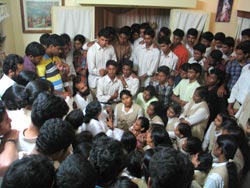 Imagine you are in college and get the word: “The chancellor called. She would like a word with you.” Most people’s reaction would be one of panic: “Oh, my God, what did I do wrong?”

But at the Amritapuri campus of Amrita Vishwa Vidyapeetham, the students were scrambling as fast as they could to reach the chancellor’s office. They dropped everything–leaving in the middle of their classes, in the middle of their labs. The jetty where the students travel across the backwaters by boat was overflowing. Amma–the university’s chancellor–had called them–all of them.

As Amma’s European Tour was about to begin, some of the graduating students had been sad that by the time Amma returned in December, they would no longer be living at the ashram. So some of the upcoming graduates asked Amma if She would meet them before She left. But no one had expected this: Amma to stop everything and spend the full day speaking with and giving darshan to all of them–more than 1,000 boys and girls–in Her room.

Everywhere one looked, there were students. They waited in the courtyard around Amma’s room in groups, most talking excitedly about their good fortune. There were the computer students, the engineering students, the new biotech students–even some of the Industrial Training Centre students who study in Puthiyakavu.

Every 20 minutes or so, a group of 30 to 60 would be called up the stairs, along with their teachers, to Amma’s room. As soon as one group came down, all those waiting would pounce on them: “What did She say? What did She do?” For the most part, She spoke to them about cultural values and the importance of preserving them.

“In the West, they have so much “freedom,” Amma told many of the groups, citing Westeners’ ability to marry whomever and whenever they want. “But as far as Amma can tell, they are suffering more than us. If it was real freedom, why would they be suffering so much?”

Amma then said how when 60-to-70 year-old ladies come for darshan, they are often 100 percent focused on their very aged and sick husbands–watching their every step. Amma said, “They are not thinking of themselves at all–only their husbands. When Amma sees this, Her heart fills up. When this happens, without Amma even being aware of it, Her grace flows out to them. But this sort of love is now disappearing from our society.

Amma mentioned how there used to be 30 to 60 people in a joint family, and that they used to live together as one. But, today, if there are just two people in a family, they will fight and decide they cannot live together.

Then Amma explained how living in large families and abiding by certain cultural restrictions helps one develop strength and the ability to adjust. Without them, people often become too fragile, falling apart in the face of even the smallest difficulties.

“There are so many rules here,” Amma said. “Timings to abide by, restrictions on what you can do and eat, on who you can interact with… You have to wear a uniform. Does it feel like a jail?”

“No, no, no!” the students responded in unison.

“We have Amma here!” one of them added.

Then Amma spoke about the importance of respecting one’s parents and making them happy.

“Your parents have put a lot of money and effort into your education,” Amma said. “They want to see you attaining something in life. That is why they put you here. We have a duty to them. Whatever you attain, if grace is not there, you will still not achieve anything. We need the love and blessing of our parents. We attain this through our simple gestures, like paying respect to them, touching their feet, obeying them. You should try to make your father and mother happy. Through your gestures their hearts will melt. This will come back to you as grace. More than your prayers, it is this that will help you.”

By way of explanation, Amma cited the Indian tradition of giving the mason and carpenter a gift of extra money and food upon their completion of your house. “When this is done, it makes them happy and their hearts overflow,” Amma said. “Similarly, your parents have spent money and have sent you to school, so make them happy by studying hard. This invites grace.”

“By loving and serving your parents, you will become a fit vessel for receiving grace. The melting of their hearts will indeed result in your growth.”

Amma then gave darshan to all of the students and answered many of their questions on various topics–both spiritual and secular.

When their time was up, many students begged Amma not to leave them and go on Her tour.

Is Amma their ‘wise’ Chancellor or their good Friend or their loving Mother?