At end of the morning program in Los Angeles on June 22, an older lady was waiting outside the program hall along with hundreds of devotees, hoping to catch a glimpse of Amma as She left.

She excitedly told the others around her that she had arrived a bit too late to get Amma’s darshan. Just that very morning She had seen Amma for the first time on the TV news, and she felt a strong urge to go and see Amma right away. She frantically persuaded her husband to go and see Amma. They got in their car and drove for about two hours to cover the 100-mile journey from San Diego to Los Angeles.

As Amma was leaving the hall, hundreds of devotees were gathered around Her. She walked straight over to this lady from San Diego and lovingly stroked her face with both hands several times. This lady was overjoyed by the intimate darshan that she received from Amma. She was totally overwhelmed by this unexpected shower of Love.

As Amma says, “When you take one step towards God, God takes 100 steps toward you.” 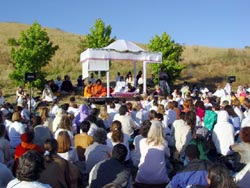 For Amma’s devotees in the United States, Her programmes at the M.A. Center in San Ramon, California are always very special. The ashram is tucked amidst the rolling, golden hills of northern California. Its dirt roads and wooded lake help one remove their mind from the hustle and bustle of modern life. If one is lucky they may even spot a deer or two at wandering about at night. And as Amma spends nearly three weeks every year there, the land is pervaded with the peace that comes with a Mahatma’s footsteps.

This year found on average 3,000 people coming every day for Amma’s darshan there. To the devotees’ delight, on many nights Amma answered their spiritual questions before singing bhajans. Amma’s answers were so spontaneous, articulate and often humours—no matter what the question. One evening a man asked Amma, “Where did God come from?” To which Amma replied, “It’s like asking your tongue where the sound came from.”

Each night, Amma sang at least one song in English, and by the end of Her stay there had also sung in Spanish, Hebrew, Farsi and Portugese.

In the early morning hours as Amma finished darshan, She would often talk with devotees, cracking a joke or two. One night, someone played Amma a short video of the brahmacharis back in Amritapuri. Amma smiled seeing the faces of Her children so physically far from Her.

More than 1,000 people participated in the San Ramon retreat, during which Amma walked out into the golden field to answer many of Her children’s questions. She then served everyone a plate of prasad dinner. More than 250 devotees also took the time to learn Amma’s Integrated Amrita Meditation Technique during the retreat. There were also talks by Swami Amritaswarupananda, bhajan classes by Swami Purnamritananda and, of course, lots of time for darshan. In fact, there was so much to do, one devotee joked that Amma may have to considered extending the day to 25 or 26 or 27 hours.

The devotees put on many performances for Amma as She gave darshan—a hula dancer, a teenage jazz clarinetist, a juggler, two breakdancers. And on the two Devi Bhavas, one of Amma’s daughters and her band played reggae and funk “bhajans” for Amma that had the younger devotees joyfully dancing on the temple’s balcony. In fact, when Swamiji sang “Amritavahini” at the end of the Devi Bhava on the 20th—Amma’s final San Ramon darshan until November—one thought the temple’s second floor might collapse! It seemed a quarter of the 6,000 devotees who’d come were dancing.

All in all, it was a blissful two weeks with Amma. But before everyone knew it, it was over, and Amma was stepping into Her camper to drive on to Los Angeles. As She waved goodbye from Her camper’s doorway, Amma reached out and pulled Her hands to Her chest, as if She were pulling all Her Bay Area children inside with Her. One man then called out, “Amma, don’t go!” And Amma, with a voice full of concern, said in English, “No! No! Not going, not going, not going.”

Amma has said that when Her children sing to Her, She is not listening to the melody and rhythm but to the feeling, the powerful longing behind the voice. But that doesn’t mean She is beyond having a good laugh with some of Her more musically challenged children.

Early Saturday morning in Seattle, Amma saw one such of Her children “meditating” near Her side. She quickly threw a chocolate at him to wake him up and then told him and a friend of his to go sing a bhajan as She finished up darshan. It was not the first time the two have sung for Amma, so many of Amma’s children traveling with Her knew what to expect.

They started with the Tamil bhajan “Amma En Azhakkayil,” immediately causing Amma to turn around in Her chair so She could watch the two musicians immersed in their art. Soon She was rolling with laughter as She continued to give darshan to Her Seattle children. The innocent faces of Her two sons showed no reaction. They were fully concentrated on the bhajan, one–to Amma’s amusement–was keeping steady time by tapping his index finger against an imaginary object in front of him, his eyes inches away from his bhajan book.

Finally, they finished. But Amma wanted more, a finale. So they began “Pasiyendral,” another bhajan in Tamil. The song’s chorus ends with a rhythmic call of “Ammama-mama-mama-mamaa^??” Well, each time the boys sang the chorus, the rhythm would all but fall apart. Amma loved this and soon would sing it along with them in their style as She continued darshan.

When they finished, Amma called them for darshan, giving them a hug and a kiss, a reward for their sweet songs.

Friday night in Seattle, one of Amma’s teenaged daughters from Canada came to Her with a question. “Amma, can I study Malayalam?” Amma gave Her a big smile and nodded Her head “yes!”

Three hours later when Amma was leaving the darshan hall, the same girl was standing there at the exit. Apparently she had been studying a few lines in Malayalam over and over again for the past two hours. So as Amma walked by, She quickly tried out Her new lines. Amma seemed delighted at the simple sentences.

She stopped and told every one how She remembered when this girl and Her sister were just tiny babies and used to fall asleep on Amma’s belly.

What a memorable first language lesson for Amma’s daughter.