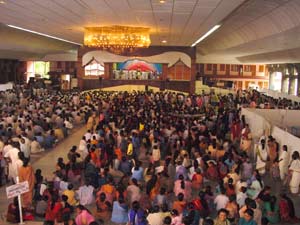 It’s been this way for 16 years now. When the Monsoon comes, all of Amma’s Indian devotees know it is time to come to Amritapuri for one last darshan.

After stopping public darshan for one week in order to spend time with the ashramites who stay behind during Her U.S. Summer Tour, Amma scheduled two final darshan dates: Saturday, May 18 and Sunday May 19.

In spite of a fierce downpour, which persisted throughout the day, more than 12,000 of Amma’s children came Saturday for a few final intimate moments with their Mother. Most were from Kerala and the neighbouring state of Tamil Nadu, however some came from as far as Delhi. The darshan, which took place in the hall normally reserved for the large crowds of Devi Bhava, went from 11 a.m. till 10:30 p.m.

Sunday, Amma once again came to the new hall at 11:00 a.m. and began what was to be 14 more hours of darshan. Despite the large crowds, Amma seemed to be taking Her time with the devotees, giving them a little extra attention before the upcoming separation.

By the end She had blessed more than 15,000 people. 27,000 in two days! For many, it was a sad goodbye – Amma will not return from the U.S. until the last week of July. But watching Amma – bejewelled with a necklace of flowers, a smile always on Her lips – one sensed no sorrow. Established in the Ultimate Reality, for Her there is no coming and going – the union of Mother and child, the perennial Truth. 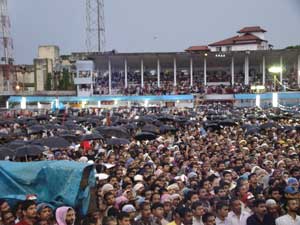 During the Palakkad Brahmasthanam, with the temperatures climbing past 40 degrees, many people in Amma’s tour group were praying for rain – anything to bring some respite from the heat. Well, they finally got the rain they were praying for in Kannur, the last stop on the tour.

By the time Amma’s tour group arrived at the programme site, the skies had darkened, the wind was blowing. Soon it began to drizzle, then it began to pour. The brahmacharis in the bookstall had to cover their items. The tarpaulin protecting the canteen quickly blew off. Even the roof to the stage Amma was about to take was soon leaking water. Her peetham had to be covered to keep it from becoming soaked.

Amma says ‘Say yes to life.’ Everyone now had a chance to practice acceptance of the current situation.

Some of the devotees ran to take cover, but most stayed where they were. The Amrita Vidyalayam marching band with their brass instruments, the Panchavadhyam musicians with their leather-headed drums, the volunteer ladies in specially made green saris awaiting Amma’s arrival, the Western devotees sitting on the ground to hear Amma’s bhajans, all stood their ground. Some took the tarpaulin covering the loudspeakers and raised it further for shelter of their own. Some opened umbrellas. Many simply became very wet.

Then Amma came, her red ceremonial umbrella this time shielding Her from the downpour and not the sun. Immediately, the devotees forgot all about the rain and ran towards Her. As they gathered around Amma, the wind suddenly stopped. The rain died down, and by the time Amma began Her satsang, the skies were clear.

Was it the devotees’ reward for throwing aside their own personal comfort in their love for Amma? Was it just another lila of the Divine Mother? Who can say, but the rain brought a wonderful cool breeze that was enjoyed by all throughout the evening — and into the morning, as Amma continued giving Her blessing until 6 a.m.