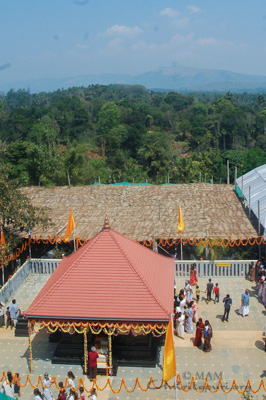 In order to get to Manantavadi, in Kerala’s Wayanad District, from Amritapuri, one must traverse some rather treacherous terrain. The small town is nestled in the range of hills that separate Kerala from Mysore. To reach there from the south, one must negotiate NH 212, which twists and turns 3,000 feet up the face of very impressive hill. Ascending, one sees families of monkeys in the trees, spectacular yet vertigo-inducing views of the valley below, as well as the occasional rusted remains of some Maruti that didn’t quite make that last turn.

Amma’s ashram is even further up, amongst the coffee and tea plantations for which the area is renowned. The mornings are cold, covered in mist and in general make for easily divorcing one’s mind from the turmoil of life below.

Manantavadi has deep roots in the spiritual heritage of Bharat. Sage Valmiki, the author of the Ramayana, is believed to have had an ashram nearby, and it was there that Sita stayed during her temporary exile from Rama’s kingdom. Even Lord Brahma is said to have spent time there when first surveying his creation.

Regardless of Wayanad’s beauty and historic past, life has not been very kind to the area’s tribal population. The changes in the past couple hundred years have left the majority of them behind—undereducated, underpaid, undernourished… They have survived only by sticking together, and as such it was impossible to separate them, literally. During Amma’s programs in Manantavadi, the men and women would not leave each other, even to go for darshan, for which two lines are traditionally created—one for the men and one for the women. For Amma, it was not a problem. She instructed the people in charge of the queues to allow them to come in the same line.

During the past 15 years or so, the Ashram has initiated a vast array of programs for Wayanad’s tribal population—the Amrita Kripa Charitable Hospital for tribals in Kalpetta, outreach medical camps, village resource centres, cottage-industry cooperatives, adult education programs… But healing a people in terms of healthcare and education is only half of the battle. The emotional devastation caused by poverty and disease are not so easily remedied. For such ailments, love is the only medicine, and that is exactly what the thousands of them who came for Amma’s darshan received. Many of them—men and women—were in tears after coming out of Amma’s arms. 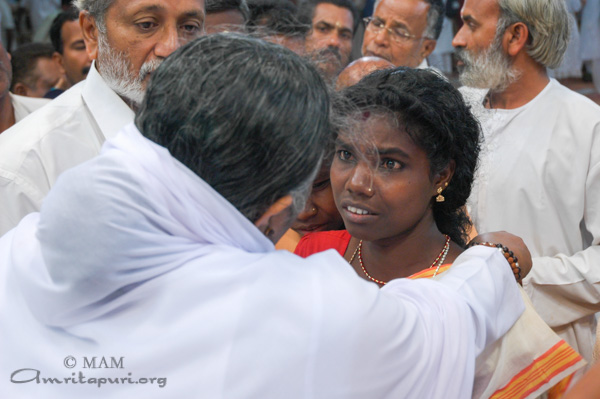 On the second night Amma was in Manantavadi, the tribal people performed traditional dances, set to the music of percussion and flute for Amma. Theirs is a slow, sad dance, and one cannot help but wonder if it was always that way. Their first performance took place on the dais, behind Amma as she gave darshan. But later in the evening Amma called them back for an encore—this time in front of the dais, she that she could watch them properly.

Amma has been travelling around the world almost non-stop for the past 20 years now. In the olden days, one had to come searching for the Guru. But Amma’s way is different. No matter how long or arduous the travel, she’ll come looking for her children—be it Barcelona or Manhattan, the Black Forest or the Gold Coast, the mountains of Switzerland or the hills of Wayanad.