On the first night of the retreat weekend with Amma in Seattle, a dozen or so teenagers and twenty-somethings wearing T-shirts with AYUDH across the back came up to the side of Amma’s chair. One of them held a bracelet of braided pink and blue strings, which she then tied around Amma’s wrist. The T-shirted bunch were from the American wing of Amma’s youth group, Amrita Yuva Dharmadhara, and the tying of the bracelet was part of a new project the group is undertaking for Amma’s US Tour.
Raksha bandhan is an Indian tradition wherein sisters tie rakhi bracelets on the wrists of their brothers. It marks the indelible bond between the siblings. The rakhi is said to protect the brother; in return the brother vows to always come to the aid of the sister when needed. AYUDH America is weaving these bracelets and selling them in order to raise money for Amma’s projects aimed at ending India’s farmer-suicide epidemic {news}.

“The bracelets cost $3. The idea is to both raise money for the projects, as well as to create awareness regarding the epidemic,” said Lalita, 25, an AYUDH member/coordinator from Walnut Creek, California. “Each AYUDH member has pledged to weave a certain number of rakhis for selling during Amma’s tour. Here, not only are you making a bond with the person you tie the rakhi upon, but you are also making a bond with the farmers in India, promising to help protect them as well with your $3 donation. In the West, most people don’t know about the rakhi tradition. When they see the bracelets they will ask people what they are for, and then the person wearing the bracelet can tell them about the plight of the Indian farmers as well as everything Amma’s Ashram is doing to rehabilitate them.”

In India AYUDH groups have been holding meetings and engaging in service projects for more than 10 years. Now the program is taking off internationally as well. AYUDH Europe has held three youth retreats in Germany and regularly raises money for Amma’s humanitarian projects by selling hot waffles in city centres, among other activities. AYUDH America began on December 26, 2007 with a four-day retreat at Amma’s ashram in San Ramon, California. More than 60 youth attended. One of the retreat’s highlights was a question-and-answer session with Swami Amritaswarupananda, wherein the San Ramon ashram was connected to Amritapuri via Web-cam. In the past five months, AYUDH America has met more than 14 times to engage in activities like planting trees and cleaning beaches. Another retreat is planned for December 2008. 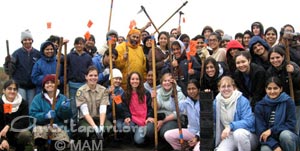 “I like AYUDH’s youthful enthusiasm,” said Gilad, a 22-year-old AYUDH member from Berkeley, California. “We run the group ourselves. It’s not that someone else decides what we are going to do. Anyone of the members can offer suggestions and submit a plan. Then we consider it as a group and decide.”

The experience of tying the rakhi on Amma’s wrist is something the AYUDH America members will no doubt remember for the rest of their lives. Afterwards, Sri Vidya, 25, of Cupertino, California, said “When we tied it, it was so nice. No words were needed. We knew what it was about, and Amma knew. There was something so special and nice about it.”
— Kannadi