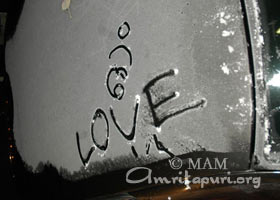 Francis, the man who drives Amma when she is in Paris, has been a devotee of Amma since she first began visiting Paris more than 20 years ago.

This year it was very cold when Amma was in Paris. Some nights it got down to -9 degrees Celsius. As such, on the second night of programs, a layer of frost formed on Francis’ car as it waited outside the program-hall door to take Amma back to her room. Seeing this layer of frost, a boy around 10 years old, wrote the word “love” on it with his finger. When Francis saw this, he was a bit upset. He rebuked the boy, telling him that he did not like anybody writing on his car. The boy became a bit sad and walked away.

A few minutes later, Amma came walking out of the hall with her hands outstretched, touching all of her children one last time for the night. When Amma reached Francis’ car, she noticed the little boy’s “love” written on the car. Amma then decided to write something of her own, marking with her finger “Om” in Malayalam script next to the “love.” When Francis saw Amma writing on his car, he was overjoyed. Even as he drove Amma away in the car, he was thinking about the best way to preserve what Amma had written. Not wanting Amma’s words to be wiped away by the wind, he drove slowly and cautiously.

As soon as Amma left the car, Francis got out his camera and took several photos of Amma’s “snow graffiti.” During the entire next day, Francis proudly showed the picture to everyone, declaring that Amma had written “Om” on his car.

Around Amma, life is constantly teaching us lessons—tiny words written in the snow with the power to transform sorrow to joy.