On 31 January 2006, Amma was awarded “The Philosopher Saint Sri Jnaneshwara World Peace Prize 2006” by the World Peace Centre (WPC), a Pune-based organization focused on bringing together the forces of science, philosophy and religion for world peace {news}. 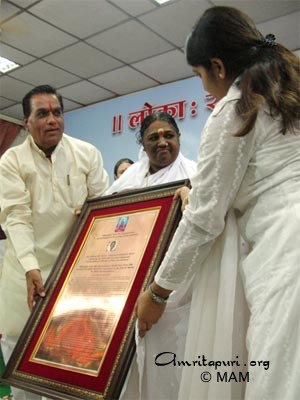 Amma had not been able to come to Pune to receive the award at that time, so Swami Amritaswarupananda accepted it on her behalf. However, on the first night of Amma’s programmes in Pune, the WPC came forward to present the award to Amma directly.

Prize Committee members Dr. Vishwanath D. Karad, the renowned educationalist and director of Maharashtra Institute of Technology, and Padmashree Dr. Vijay P. Bhatkar, the renowned computer scientist, presented Amma with the citation of honour, an idol of Sant Jnaneshwara and a cash prize of Rs. 500,000. However, Amma did not accept the cash prize, saying from the dais that the money should be put in the bank and the interest used to create scholarships for poor children. “It was given for peace, and peace is in serving the needy,” said Amma.

Both Dr. Karad and Dr. Bhatkar addressed the gathering. Dr. Bhatkar said that when the Peace Prize Committee—which also included Padma Vibhushan Dr. Raghunath A. Mashelkar (chairman), Padma Vibhushan Dr. Mohan Dhariya and Advocate Bhaskarrao E. Avhad—began discussing candidates for the award, they decided, “No other person has done so much for world peace than our own Amma.” 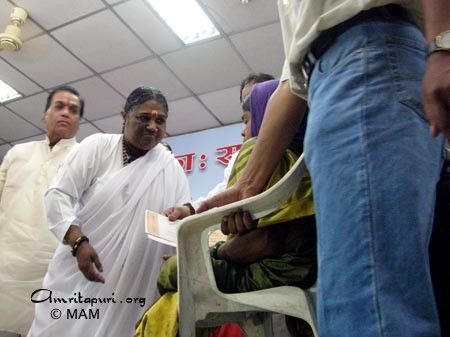 “Amma often says that the Creator and the entire creation are one, and through the message of love—transcending the barriers of nations, language, casts, creeds, colours—she has embraced the entire humanity, the entire world. And this peace prize should be conferred on Amma,” Bhatkar further explained.

Amma then distributed certificates of enrolment to 10 or so new beneficiaries of the Ashram’s Amrita Nidhi lifetime free pension programme. This was symbolic of how the programme has been extended to an additional 1000 beneficiaries in the Pune. The new enrolees also received their first three-month pension onstage.

Smt. Mangalatai Kadam, the Mayor of Pimpri Chawad, was also present for the programme.

The formal programme was followed by Amma’s satsang, her leading of the devotees in meditation, manasa puja and bhajans, as well as darshan.