Amma has been coming to Kolkata almost every year since 1988, but only recently did the Math acquire property in the ancient city upon which to construct an ashram. 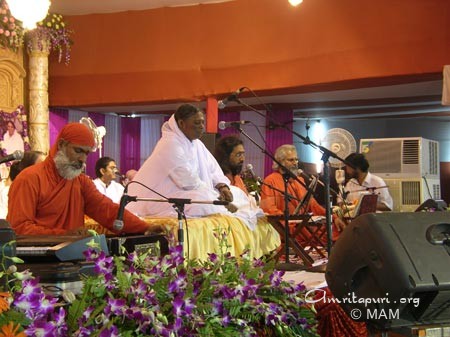 The Kolkata Ashram is located on a five-acre piece of property in Gokulpur, on the outskirts of the city. Its Amrita Vidyalayam is ready for the 2006 – 2007 academic year, and its Brahmasthanam Temple, the structure of which is almost complete, will most likely be consecrated by Amma during her next Bharata Yatra.

Amma’s second night of darshan in the city took place in the ashram itself, with a tent erected at the side of the permanent buildings.

In fact the main event of Amma’s formal programme was the launching of the Amrita Vidyalayam. Chief Justice of the Kolkata High Court V. Sirpukar lit the lamp in the presence of Amma.

Speaking on the occasion, Chief Justice Sirpukar said, “Amma, our mother, is like a touchstone. Whoever gets her touch is blessed with divine peace, love and affection. To start with, Amma has blessed Kolkata with a school, which will bless many children with a good life.” 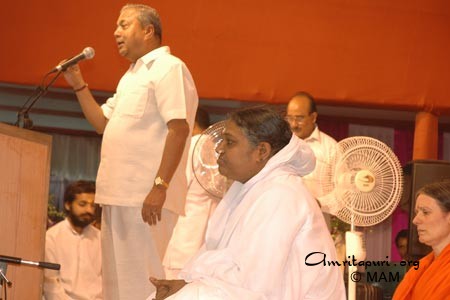 Shyamal Sen, the Chairman of the West Bengal Human Rights Commission, also participated in the formal program, distributing pensions to new beneficiaries of the Amrita Nidhi pension program. The program has been extended to 1000 more beneficiaries in Kolkata.

“In this materialistic world, we can own many things, but to get happiness of mind is difficult,” said Sen, a former Chief Justice of the Kolkata High Court and former Acting Governor of Kolkata. “By serving people we can get divine peace, which Amma has shown through her various wonderful contributions to mankind. By simply coming over here, I have gained so much mental peace and happiness. It is almost like getting divine bliss.”

Justice Tapan Sen of the Kolkata High Court also participated in the programme.