Amma was presented with the Interfaith Center of New York’s 4th Annual James Parks Morton Interfaith Award. The Interfaith Center of New York (ICNY) bestowed the award upon Amma for her outstanding role as a spiritual leader and humanitarian, citing in specific her Ashram’s massive relief work in the wake of the 2004 tsunami. As part of the award ceremony, Amma delivered an address on intra-religious understanding and collaboration. 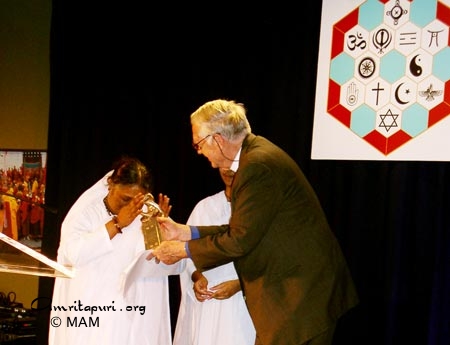 This year, five others were honored aside Amma: 2005 Noble Peace Prize Laureate Dr. Mohammed Elbaradei, Director General of the International Atomic Energy Agency; U.S. Supreme Court Justice Stephen G. Breyer; the renowned American actor Richard Gere, for his work as Director of Healing the Divide and as Chairman of the Board of the International Campaign for Tibet; and the pair of Imam Feisal Abdul Rauf, the Imam of Masjid Al-Farah, and Daisy Khan, the Executive Director of the American Society for Muslim Advancement.

One-word solution for all the problems 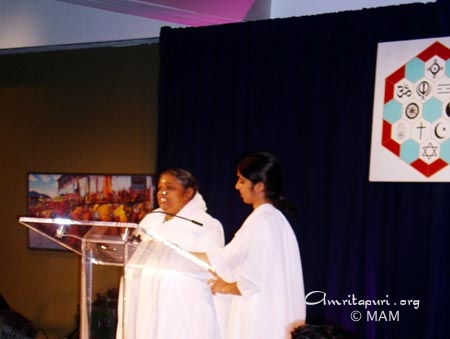 Speaking on “Understanding & Collaboration Between Religions,” Amma said, “A one-word solution for almost all the problems the world is facing today is ‘compassion.’ The essence of all religions is in being compassionate to others. Religious leaders should highlight the importance of compassion through the example of their own lives. Nothing is scarcer in the world today than role models. To bridge this gap, religious leaders should come forward.”

Amma also said, “While great souls give importance to spiritual values, their followers often give more importance to institutions and organizations. As a result, the very religions that were meant to spread peace and tranquility by stringing people together on the thread of love have become the cause of war and conflict.”

The award is named after the founder of the ICNY, the Very Reverend James Parks Morton.

Reverend Morton founded the ICNY after retiring from his service as Dean of the Cathedral of St. John the Divine, the Seat of the Episcopal Diocese of New York, in 1997. He has been the ICNY’s president ever since.