Blog - Latest News
You are here: Home / Amma was in Lebanon! 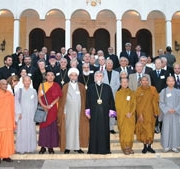 Amma, Sri Mata Amritanandamayi Devi was invited to attend a Middle East-Asia Inter-religious Dialogue “A Recommitment to Spirituality for Mutual Understanding and Peace” organized by the Global Peace Initiative of Women in partnership with Catholicos Aram the First and held in Beirut, Lebanon from 12th to 14th November 2006.

The topics discussed included “Compassion and Tolerance,” “Prayer: The Heart of Spirituality,” “Sacredness of Life: a Gift and a Call to Spirituality.” Discussion groups were formed after each session.

Due to her pre-booked schedule, Amma was not able to attend the event. She did however send a written message to the gathering, which was read during the morning session of the 14th by Priyan (Lawyer Fuad Nassif, a Lebanese resident of Mata Amritanandamayi Math, Amritapuri.) Amma’s words went straight to the hearts of the audience, who responded with great enthusiasm, showing their deep appreciation of her message. Read complete message…

The conference included visits to the Patriarch of the Maronite Catholic Church, to the Grand Mufti of the Sunni Muslims and to the Mufti of the Shiite community. There were also visits to residential neighbourhoods in Beirut destroyed by air raids during the recent war, and encounters with youth, orphans and disadvantaged children.

The conference’s recommendations were adopted in the concluding session. These included words from Amma’s message that religion should be separate from politics, as well as the need for deeper continuous dialogue and the need for the spiritual leaders who participated in the conference to work together to for the common good. 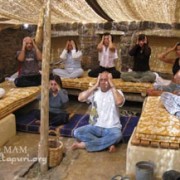 I AM Meditation Classes in 2008

Religions must be separated from Politics