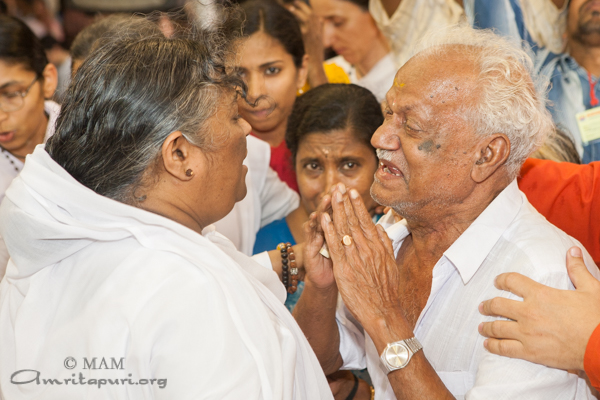 In Kodungallur, there is a very famous Devi temple which attracts thousands of pilgrims every year. One specialty of this temple is that it is surrounded on three sides by about a dozen peepal trees, all hundreds of years old. Seeing them, one is reminded of the Bhagavad Gita verse, ‘urdhvamulam adhasakham asvattham prahur avyayam’ – ‘the Vedas speak of the immutable peepal tree (the tree of samsara), with its roots above and branches below.’ (15.1)

Even though this tree of samsara is immutable, it can be severed with the sword of detachment (asanga sastram). Amma’s visit to Kodungallur is for giving people this weapon, that of devotion, knowledge, and dispassion. In Amma’s talks here, she tells the people to understand the nature of the world and its objects. At the same time, Amma also gives practical advice for the people to manage their day-to-day lives and their families.
The brahmasthanam in Kodungallur is the first of its kind installed by Amma, in 1988. Maybe that is why it seems that among the devotees coming for darshan, many seem to be old and familiar faces. One can see Amma’s face light up on seeing an old face, and on saying a word or two to them, or asking their welfare, these devotees’ faces beam with joy. Many of these old devotees are even too old to walk, so they have come on wheelchairs for darshan.
From the very start of darshan, Amma made an announcement through the mic; ‘Because of the large crowd, darshan will be fast. But don’t worry. Amma has made a sankalpa.’
Showing her concern for the devotees coming, Amma also announced, ‘all kinds of people come here. There are some pickpockets here. Make sure you take care of your jewelry by fastening it to your cloth and cover yourself with a sari.’
People participated in all of the pujas with love and devotion, and at the end of the last day’s darshan, Amma sang ‘Mata Rani.’ Amma returned back to Amritapuri with more than 1000 western children waiting to celebrate Christmas with Amma.