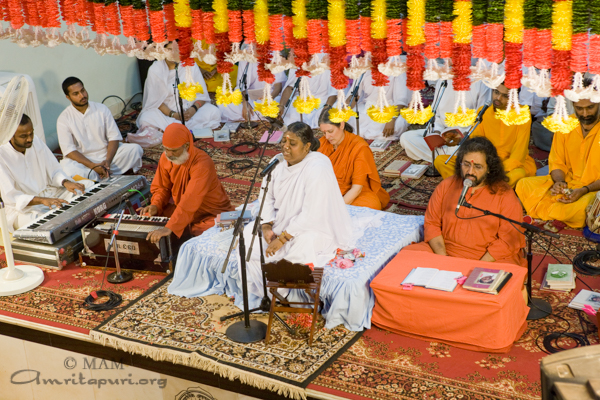 Amma has been known to call Kozhikode her own Vrindavan. (Vrindavan is where Lord Sri Krishna lived his childhood, along with the fervently devoted gopis) Last year, Amma held a one-day program in a large stadium in the city. This year, it is a three-day festival in Amma’s brahmasthanam temple. One can definitely feel the positive energy of Amma’s temple.

The method used for managing the darshan has improved from the previous years. Now each devotee is given a token with a letter of the English alphabet, (A, B, C, etc.) and only has to wait in line once that letter is called. This eliminates a lot of the difficulty for those who come to see Amma. Seeing any potential problems in the wave of people coming to receive darshan, Amma herself announced through the mic, ‘because of the amount of people here, volunteers will pull the devotees forward to receive darshan. Don’t feel troubled by this.’ Any spectator would be amazed at the speed of the darshan, as well as the enormous amount of people who come.
The line for darshan began right after Amma arrived at night before the first day’s program. The same devotees who waited in line at 8 that night received darshan the next day at noon. Just think – a 17-hour wait for two seconds of darshan.

For the majority of people, they will wait another year for these two seconds.

The most amazing thing is that one can find no trace of impatience in the devotees who come for darshan. Because the programs begin at six in the morning, the darshan ends around two hours before that. Still, the devotees continuously pour into the brahmasthanam. Some devotees who came that night will have to wait for the next morning to have darshan. Even still, when they are told this, they simply accept it without any impatience. Such devotion!

As a reflection of the people’s innocence, Amma also appears very lively and spontaneous. On the second day, during the evening satsang, Amma spoke at length about the different aspects of householder life. The satsang was almost an hour long.

Just as Amma’s embrace is available for all, so is the food. Devotees receive free meals all night at the ‘anna ksetram.’ After eating, the volunteers stand ready to receive the plates and wash them.

The news dailies are passing out special supplements about Amma. An interesting article was written by an atheist. He writes, ‘I’m not a believer in God. My religion is not Hinduism. But even if the Indian prime minister or American president decided to give this much peace of mind to people, it wouldn’t happen. Amma’s real strength is the spiritual energy to give some peace of mind to those who come near her. That isn’t a small thing.’