Amma is starting an orphanage in Haiti in order to care of children who lost their relatives in the earthquake of 12 January 2010. 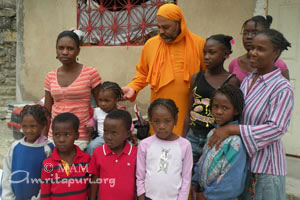 A four-story house rented in Laboulle, a suburb in the hills outside of Port-au-Prince, which is in the process  of being converted into an orphanage. The orphanage will initially assume care for 25 orphaned children.

Reports say that after the earthquake Haiti is now home to nearly one-million orphaned children. 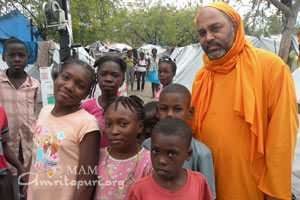 Orphanage in Haiti will be its third such institution; the others being Amrita Niketan in Kerala, India (1989) and Amrita Watoto Boma in Nairobi(2009).

The new orphanage in Haiti is being developed specifically through the Mata Amritanandamayi Center’s Health Care Charities, Inc., and the Amma Foundation of Canada.