Every year on this date the birth of Jesus Christ is celebrated around the world. This year over 1200 visitors from all over the world and many more from India gathered to spend the holiday in Amritapuri. For this Christmas, many of the ashram residents put together an original musical production depicting the life, teachings and ministry of Jesus as recounted by Thomas*, one of Jesus’ disciples.

Just before 10pm Amma arrived to join a full hall of spectators waiting for the show to begin.  Soon the stage doors opened to reveal immaculate set decorations depicting different scenes in ancient Israel, including a 10 meter high Roman tower erected in the bhajan hall, complete with burning torches from where Pontius Pilate looked down with disdain upon his subjects.  For the next hour all the cast members danced and moved about on stage in wonderfully elaborate costumes depicting the roles of Jesus, his disciples, rabbis, Romans, etc.  Hidden just out of sight of the crowd other ashram residents sat on the side of the stage providing all the voices for the characters, led by a full live band including violin, guitar, bass, harmonium, percussion, etc. playing wonderful original music.

There were several moments of comic relief throughout the play, but most scenes tried to present the essence of Jesus’s teachings. Throughout our history we have confused the “I” spoken by Jesus to mean “I” the Christ, “I” the man.   Due to this misunderstanding countless wars and atrocities have been committed in His name.

After the musical’s joyous conclusion, Swamiji translated Amma’s Christmas message. “Christ is born along with each and every human being. Christ is still alive and will always continue to be. But not in the form of 2,000 years ago. He lives as our very essence. We need to realize this: The real Christ is our inner ‘I,’ our consciousness. Only when this understanding dawns, will we become true ‘Christians.’ 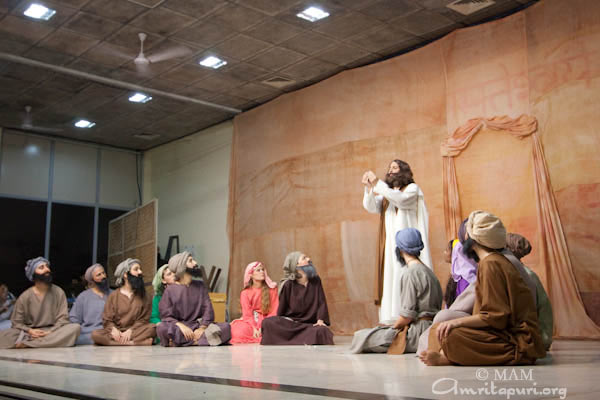 Throughout the Bible, we hear Christ saying, “I am the son of Man.” But he also says, “I am the son of God.” We may think these two statements are contradictory, but they are not. As long as we remain identified with our body and mind, we will have the tendency to view mahatmas as similarly being limited by the body and mind. But the reality is that they are firmly rooted in the supreme consciousness. They are beyond time and space. God and life are like the two banks of a river. Mahatmas are like the water flowing between the two banks, uniting them.”

As soon as Swamiji finished speaking, Amma led everyone in the hall in singing Matarani.

And then came the moment everyone waits for on Christmas Eve…Santa’s arrival.  One of the ashram residents appeared dressed as Santa near Amma with a tray of chocolate Christmas cake (an annual tradition here) to offer Amma the first piece.  After her taste, Amma then looked on as Santa and the cast of the musical, including Jesus himself distributed the cake to everyone.

* The Gospel of Thomas was once known only by name as one of the gospels excluded from the bible. It bore a remarkable resemblance to the basic principles of Hindu Philosophy.