Granollers was the first stop of Amma’s 2018 European Yatra.

The evening of her arrival in Spain, Amma received a warm and rousing welcome from her children, who had gathered from all over the country to help organize the program.

Amma was welcomed to the region by the Mayor of Granollers, Josef Mayoral, who expressed that he was delighted to have  Amma back in Granollers after a gap of three years. 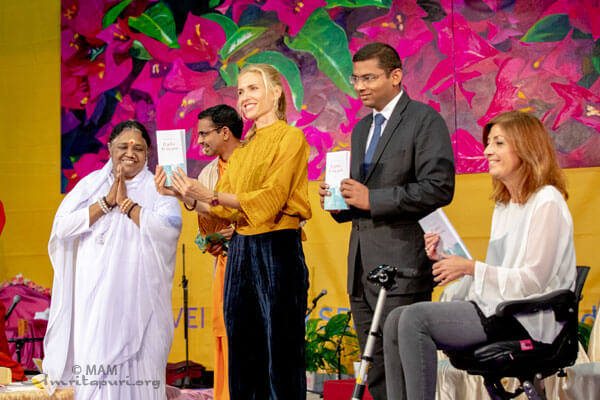 Speaking on the occasion Ms Mireia López-Ontiveros, Councilwoman of Culture in the Granollers City Council reflected, “Amma is a person of peace who has an infinite humanity. Spirituality, generosity, solidarity, all of them know no borders and Amma uses them perfectly. Because of this, she is our greatest Ambassador, the great Ambassador of peace all over the world. Wherever she goes, people understand her and love her.”

Ms Judit Mascó, a Spanish model and TV host shared her delight in being able to meet Amma: “Amma is a person full of light and love, who can give so much love and support, empathy and so on with her hugs, that are so necessary and that we need so much. It is such an honour to be here, and I can only thank you greatly, Amma.”

While addressing the assembled crowd, Amma spoke about the importance of remembering the in-dwelling consciousness that unites all of us. “Everything in the world has two parts—the internal and the external. But, today, human beings have forgotten this truth and give importance only to the body and sensory pleasures. Humanity has stopped considering the Atma—the in-dweller. As such, they have become like a nice set of clothes with no one to wear them. When we only acknowledge the external and discard the internal, it creates a state of imbalance. This is the main reason behind all the problems we see in the world today.” 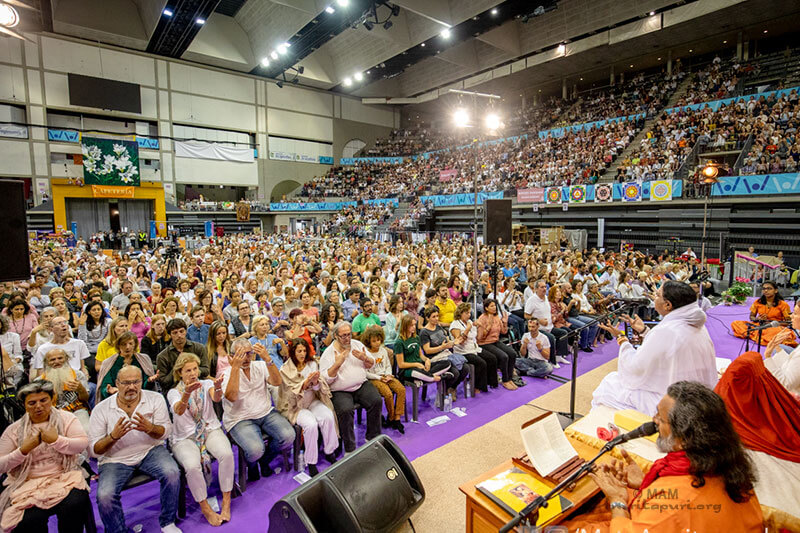 Amma gave darshan and Satsang on all 3 days, devotees participated in silent meditation and the prayer for world peace led by Amma.

All three days were marked by beautiful and festive cultural performances drawing on local traditions, including a spellbinding presentation of the flamenco dance.

Before the Atma Puja on the final evening of programs, the Palua d’Esport Granollers was filled to capacity. As has become a local tradition at Amma’s annual program, the stadium welcomed Amma with a wave. The sight of the devotees’ arms rising and falling in perfect synchrony and harmony called to mind the waves of love and compassion that had once again washed up on the shores of Europe with the commencement of Amma’s annual tour.