Sixteen years ago Amma visited the city of Vadakara and held a program near the city bus stand. This year Amma returned to hold an evening program in that same location.

When Amma arrived at the Vadakara program, it was thronging with devotees who came to hear her words and receive the embrace of her darshan.

There to welcome her to the city was BJP State General Secretary K Surendran, who said on the occasion, ”At this present time when India is becoming the Jagat Guru, Amma’s contribution in taking India to that status is invaluable. All of Amma’s activities are for the welfare of mankind and world peace. Herself being an inexhaustible source of compassion, Amma is rescuing humanity from all kinds of disasters.”

Padmasree Meenakshi Amma Gurukkal; CK Nanu, Vadakara MLA; and Kadannappally Ramachandran Minister of Port and Archeology were also on the stage to greet Amma upon her arrival.

Despite a local bus strike that hindered transportation in the city, the program was swarming with devotees by the time Amma arrived on stage to deliver her talk.

In her satsang, Amma said, “Compassion is the unconditional law of creation. The beginning, sustenance, and the culmination of every individual, of society, and of the world, is compassion.”

Amma led everyone in a manasapuja and meditation aimed at cultivating compassion in the individual and the world. 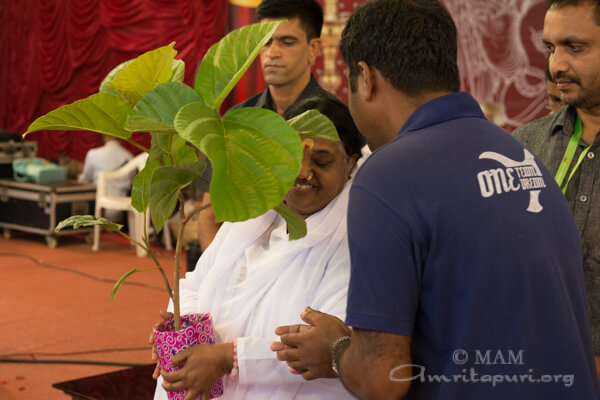 Working capital and saris were gifted to the members to AmritaSREE self-help groups and AYUDH members were given saplings for planting (four different trees which are highly medicinal: Athi, Ithi, Arayal, and Peral) as part of the ‘Nalppamaram Nadinu Nanma’ program.

Darshan went all although the night until 8:40 AM the next morning, at which point Amma parted with devotees of Vadakara and headed to Mangalore for the next stop of the 2018 Bharata Yatra.