When we think about Lord Krishna, what are the first thoughts that enter our mind? Different people will answer in different ways. This is because Lord Krishna won’t allow himself to be confined within our limited thoughts and ideas. But one thing is clear: Everything about Krishna is sweet, alluring and beautiful. 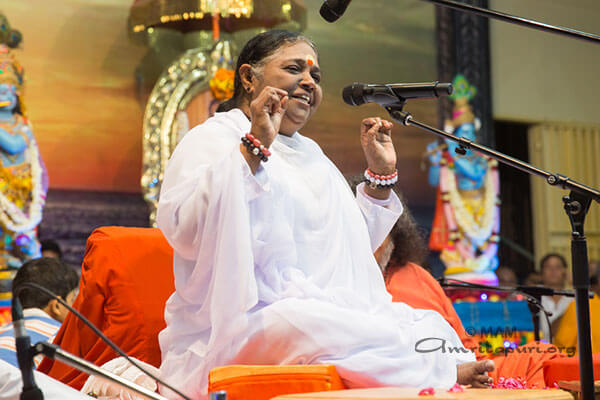 We often talk about the many facets and roles of Lord Krishna. An unparalleled protector of dharma, a skilled political strategist, advisor of the great Bhagavad-Gita, an unbeatable warrior… These are some of them. But Krishna—who, indeed, was all of these—was also love incarnate, the giver of love. The magnetism of his love enticed not just the gopis and gopas, but all of creation as well. Nature herself was charmed by the sweet notes of his bamboo flute.

The Supreme Truth is beyond thought and word. However, when the Supreme assumes a human form, accepting all the shortcomings and limitations inherent in such, and comes into our midst, we are provided with an opportunity to tangibly touch the Supreme, to know it. Not only Sri Krishna’s words, but his every movement, his every look and mood, conveyed the fullness of spiritual wisdom. His very presence was a spiritual experience. Every action of his illustrated the principles expounded in the Vedic scriptures.

It is impossible to explain the sweetness of honey with words, but just tasting a drop of honey will give us the experience of that sweetness. Similarly, in the presence of an avatara, the Supreme Truth is revealed and shines forth. Doubts turn into faith, faith turns into knowledge, and knowledge expands into experience. Avataras do not take birth and live on earth like ordinary people. They continue to live forever in human hearts as the very culture of the society into which they manifested—as the very guiding light of the world.

Their guidance stands true for all time, all countries and all people. Lord Krishna’s teachings are just as relevant today as they were 5,000 years ago. The Krishna-influence pervades and pulses in all planes of Indian culture and in the daily life of its people. Our literature, music and art are enlivened by his touch.

Lord Krishna’s life is full of paradoxes. The eternally free Lord was born in a prison. He played all the pranks and mischief of a capricious child, but also accomplished great feats beyond human capacity. He was crowned king and became the lord of the world, and yet he surrendered in defeat before the devotion of his devotees. He was an extraordinary grhasthashrami [householder], yet he maintained the pure chastity of a sannyasi.

On the occasion of the royal rajasuya yaga conducted by Yudhishthira, in the august presence of rishis and kings, Lord Krishna let Yudhishthira wash his feet as the guest of honour. Yet, the Lord was washing the feet of the other guests a short while later.

As Arjuna’s charioteer Sri Krishna advised the Gita. He gave Arjuna his vishvarupa darsahan—the vision of his universal form. Yet, the very next moment, we see him as a charioteer, attending to Arjuna’s horses. Who else but the Lord could hold things so seemingly opposite in the palm of his hand?

A person who has worked as an officer may not be willing to work as errand boy. He may protest, “How can an officer like me do such menial work?” Sri Krishna became a child when he was amongst children. He became a youth in the company of the young. He danced with the gopis and became their friend. When his friends were hungry, he stole butter from the gopis houses to feed them. In fact, the gopis wanted Sri Krishna to steal the butter from their houses! Hence, through this lila he was able to kill two birds with one stone. One cannot find a mahatma who played as many roles as him.

Karma and the result – what to do?

Through his own life, the Lord illustrated the greatness of any type of work. No other spiritual teacher has expounded the value of action as much as Lord Krishna:

“O Arjuna, I stand to gain nothing in all the three worlds, yet I am continuously engaged in action. At least for the welfare of the world, do action. Perform your action with no desire of its results.”

Some people ask if this means that we should work without expecting to be paid. No, it does not. When we sow a seed, it may sprout or it may not. We may sow seeds at the right time. We may dig bore-wells and make sure that the crops get enough water. Regardless, if there is a flood just before the harvest, everything will be lost. Many people commit suicide when their actions don’t bear the expected fruit. But if one is prepared to face both kinds of results—failure and success—then one won’t fall to such extremes. Krishna’s advice is very relevant here. There is no point losing ourselves in grief. We only have the right to put in effort. The results are not in our control. Thus we should accept whatever comes to us as the fruit of our actions. His advice was to live in the world while understanding its nature. Through this, we develop the capacity to view things from a distance.

Usually, people work to fulfil their selfish desires. However, when we perform an action even for a short while without expecting anything in return, it purifies our mind. It is difficult to live selflessly. What makes us selfish are our desires. Amma does not say that it is wrong to have desires. Because many of us lack spiritual understanding, it is impossible to live without desires. We will desire food when hungry; there is nothing wrong in that. We may want money for our livelihood; that is not wrong. It is only when our desires become too many and we become ready to exploit others in order to satisfy them that desires become problematic.

If we incorporate the attitude “I am just an instrument in God’s hands,” then the burden of karma will fall away from us entirely. Only when a pen is in someone’s hands can it write letters. It does not write on its own. So too it is with a paintbrush. It does not paint on its own. Someone has to hold it to paint. We have to be like a pen or a brush in the hands of the Divine.

The Lord always wore a peacock feather on his head. What is its meaning? It means that the Lord carried all the world’s responsibilities and actions as if the were as light as a feather.

Krishna taught Arjuna that behind every action is God’s power. If we abandon the feeling of doership and surrender to being an instrument in God’s hands, that divine power will flow through us. If we become like a pipe attached to the tank, all the water in the tank can be used for the sake of many through us. When we become a zero, we truly become a hero. Whatever we want will become possible, and we will be freed from all anxiety and fear. The Lord called this capacity as karmasu kaushalam—“dexterity in action.” This is one of the most important teachings the Lord gave the world.

There are similarities and differences between the earth and Lord Krishna. The earth attracts everyone and so does Sri Krishna. However, while the earth pulls everyone down, Sri Krishna draws one and all up to the heavens. “Perform your duties wholeheartedly with an attitude of surrender and detachment. Be happy, smiling and enthusiastic in life like a child.” This was Sri Krishna’s message.

The birth of Sri Krishna

In reality baby Krishna should take birth in our hearts. It is not enough if we have faith in the doctor and take the medicines as prescribed by him. We need to follow the diet he prescribes as well. Only then will we fully regain our health. Similarly, to overcome the disease of birth and death, we have to follow certain yamas and niyamas—do’s and don’ts. Only then will the divine love or Sri Krishna take birth in our heart. May the light of the divine presence grow in your hearts, eliminating any darkness within. May this light overflow towards the whole of creation. May divine grace bless my children.