26 Jul 2016, Amritapuri
Usually, when we give gifts to someone, it is as an expression of our love towards them, or to celebrate a certain occasion. When we give gifts, we try to give someone something that they do not have. However, when we give gifts to a Mahatma, it is considered an offering. Offerings such as food, clothes, etc. are like the son gifting his father using his father’s own credit card; we are simply offering items which the Guru already owns. In the case of a Mahatma, who possesses the knowledge of the Self, what can we possibly give? The only thing we can offer that they do not already own, is the gift of our Vasanas (tendencies). 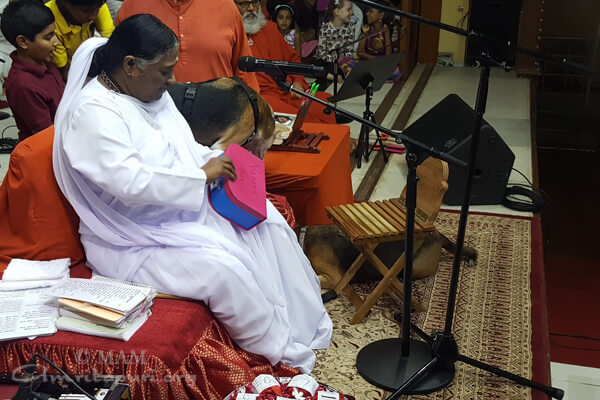 And that is exactly what a devotee presented to Amma the other day in Amritapuri. When Amma came to the stage for bhajans, there was a red box kept on her peetham. She took that box, and read the box’s label aloud. It was inscribed, “the Vasana box.” Amma opened the box and started taking the contents out one by one. Inside the box were slips of paper, as well as clothing and other objects with notes attached. On each slip of paper or note, a different feeling and emotion was written on it. One note said “laziness.” The next: “anger.” There were more: “lust,” “depression,” “greed,” – the list went on. Rivalry. Jealousy. Hatred. Money. Taking them out of the box, she read them out one by one. Her face lit up with an innocent smile – the happiness of a child receiving a gift on her birthday. For the rest of us to receive gifts with such delight, it would have had to have been a box of diamonds.

As it turned out, the ashram resident who created this box and offered it to Amma, had been listening regularly to Amma’s manasa puja instructions, wherein Amma says that we have to offer everything at the feet of the Lord. It was this instruction that inspired him to offer his vasanas to Amma.

It was a beautiful moment, and it showed us what truly makes the Guru happy: to see a disciple conquering his/her vasanas, and moving forward along the spiritual path.