Amma held a two-day program in Trissur where she conducted satsang, bhajan and darshan.

Amma distributed samplings and seeds promoting organic farming in each ones’ house. 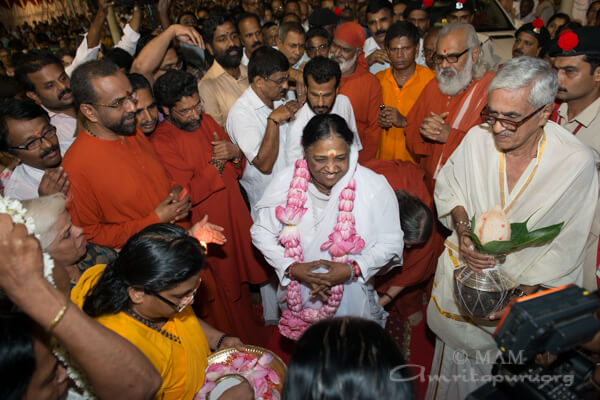 Speaking on the occasion, Amma said: “When we look at Bharat (India) today, we see two faces. One face is shining and happy because we are making giant strides in science and information technology. The other is hiding in the shadows. It is the ugly face of pervasive poverty, illiteracy, poor health, crimes against women and environmental pollution. A split personality is never a sign of sound health. If we want to see a powerful and healthy world, these two faces must merge into one beautiful face. Then no one will go hungry. No one will suffer without a place to sleep. No one will die due to lack of proper healthcare. If we can bring our collective knowledge, compassion and talents together, we will soon see the entire world rising and thriving with peace, harmony and prosperity.” 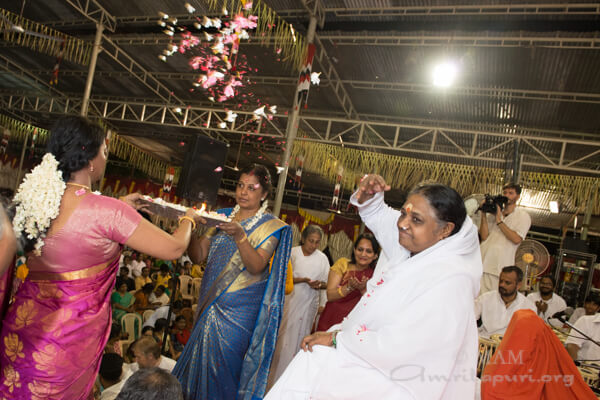 Cooler than temperatures in Kochi, the heat was still scorching and unbearable for many residents. One devotee prayed to Amma during darshan, “We want rain, Amma please make a sankalpa (resolve).” “What kind of rain?” Amma asked. “Good rain,” the devotee responded. Amma said OK. Less than an hour later, a heavy rain, complete with a thunder storm and lightning began, bringing a cool and strong wind along with it. Suddenly everyone’s face lit up – it was raining cats and dogs. Water was everywhere. Amma asked to switch off the lights and the temporary electrical supply on the ground.

The wind blew the rain onto the stage and onto Amma as she gave darshan. Unperturbed, she was continuing her work – giving darshan and enjoying the rain. The rain became heavier, with wind spraying water all over the stage. The devotees found a way to protect Amma from the downpour; they got tarpaulins and spread them above their heads and stood under that. Amma continued darshan.

Come what may, continue to do what you have decided to do. In heat or cold, persevere and be committed – it was beautiful practical demonstration of this principle, just like so many others Amma demonstrates in her daily life – day after day.

At the end of darshan on the second day, Amma sang a holi song and the 2016 Bharata Yatra – trip to Indian cities nationwide had finally come to an end. Next stop – USA.