On the second night of Amma’s programs in ’s Hertogenbosch, Netherlands, Rabbi Awraham Soetendorp, former President of the Jewish Institute for Jewish Values and former head of the World Union for Progressive Judaism, welcomed Amma to Netherlands. He praised Amma as a spiritual leader at the vanguard of spreading love and compassion throughout the world and officially released the first Hebrew book published by the Mata Amritanandamayi Math, a translation of Amma’s biography. 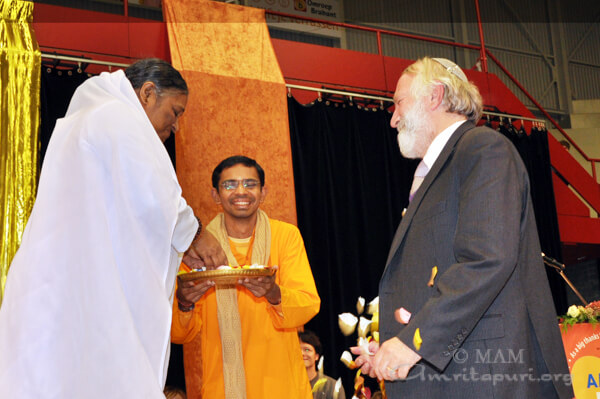 He began by telling a story: “When I was born, it was very deep in the War. And I am Jewish, and for people of the Jewish community it was dangerous—very, very dangerous. I was only a baby, but they didn’t want me to survive. Can you imagine that—that a baby is not allowed to live? They had to find a place for me where I could be safe. They carried me in a suitcase in which they had punched air holes so that I could breathe. They took me on a train. … If I had cried, they would have heard. But there was a miracle, and they didn’t hear any crying. They took me to a house and knocked on the door and asked the woman who opened the door if she would protect me. Did she have a lot of time to think about it? No. She did not have time. But she did it. She took me in with love, and I stayed alive. She was Catholic; she was German. So, for me, this means that if Amma brings people of different religions together it will save many human lives.”

He continues, “Amma teaches us that we should, at least, start with tolerance. But then we have to evolve on to respect, and from respect on to love. When we do that, then all problems are solved.

Concluding, Rabbi Soetendorp said, “Standing here with Amma, I believe—with all my heart and all my soul—that we can together create a world filled with real cooperation, love, truth and justice. I pray to God in all his names to give us the necessary strength and love. I pray that he will protect Amma and bring the love’s physical presence in the world and that we will walk together and bring and feel God’s blessing.”