After the wrapping up the five Brahmasthanam programs on the 2016 North Kerala tour, Amma travelled to Alappuzha. Amma came there upon the invitation of the Temple committee, to dedicate the newly constructed “Chuttambalam” of Kanichukulanghara Devi temple.

The Kanichukulanghara temple was set up at the behest of Sree Narayana Guru and as per the temple records.  Narayana Guru visited and stayed in the temple along with his disciples. He had also trained Ezhava community members enabling them to perform poojas in the temples.

At 10:30am a sea of devotees were on hand to welcome Amma as she arrived to visit the temple. Upon entering the temple, she lit the lamp and dedicated the Chuttambalam amidst Vedic chants.

After visiting the temple Amma continued the program across the street in a large venue set up for the event. During the public function SNDP General Secretary Vellappalli Natesan welcomed Amma to Kanichukulangara, “We are blessed to have darshan of two Devis’ today. Kanichukulangara Devi (the presiding deity of the temple) and Amritanandamayi Devi…who are one in the same. Amma has no cast, no religion, no racial discrimination. Her religion is Love.”

During the function Amma handed over keys to 10 houses newly built in Kanichukulangara area as part Amritakuteeram project. 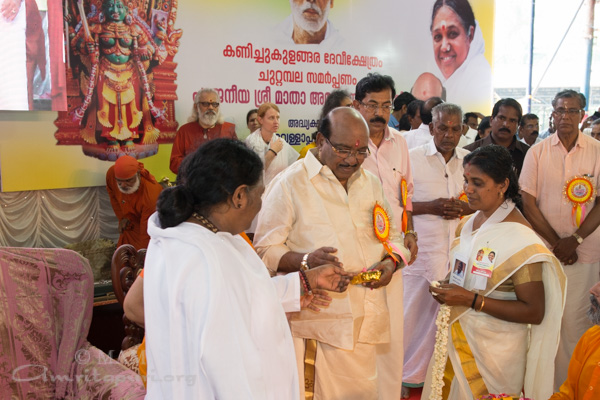 On addressing the large crowd, which seemed to be the entire village, Amma said “Human beings need a job, money and basic comforts to live, but in today’s society, where selfishness reigns supreme, the greatest wealth we can gather within our hearts is devotion. Where there is bhakti, there is the real ‘meeting’. It is not a physical meeting, but a meeting where the Jivatman, the individual self, and Paramatman, the cosmic Self, unite.

“The real question is not whether God exists or not, but whether human beings have sorrow or not. Bhakti, or devotion, is the practical way of getting rid of sorrows. Bhakti is a practical science. Bhakti is not blind superstitious belief. It is this faith that removes darkness from our hearts. Not only does it help us unburden our heart, it also amplifies our sense of righteousness and inspires us to be compassionate towards the distressed. Devotion to God and compassion for the world are but two sides of the same coin. Jñana and Bhakti are not two; if Jñana is the fruit of a tree, Bhakti is the juice of that fruit.

“Temples are sacred places where God’s presence can be felt the most. But we should have the awareness that God’s presence is not limited to the sanctum of the temple. God is the all-pervading consciousness, which enlivens every being, sentient or insentient. It is only when we think and act with this knowledge that we will be able to experience God- consciousness within oneself. We should also be able to serve everyone, seeing the God within them. A heart devoid of compassion is like a closed parachute- it cannot save us.”

At night, the Tantri (temple priests) came to Amma while she is giving darshan and did a ‘shodasa upachara puja’ to Amma as they do daily to the deity in their temple. With all the mudras and steps of the Tantric puja, they did arati to Amma.