After completing her programs in Germany, Amma traveled to Helsinki for two days of programs there. The program venue, a renovated cable factory that now serves as an exhibition hall, was located next to a lake with downtown Helsinki on the opposite bank.

When Amma arrived at the hall, she was received by a large crowd of devotees, many of whom are regular visitors to Amritapuri. Among those in attendance were a strikingly large number of media representatives. A total of 25 television, newspaper and magazine reporters came to cover Amma’s programs. Amma was major story – and the next day, she was featured in all of Finland’s major papers. One newspaper even carried a report claiming that Finland was Amma’s favorite country! Amma, who sees the whole world as one flower with each country as a petal, has definitely found a place in the hearts of the Finnish people. Their love for her continues to grow.

It may be recalled that her life and mission have been included in two of the country’s school textbooks {news}.

On the first night, Amma sang the bhajan “Where Can I Go?” in Finnish. 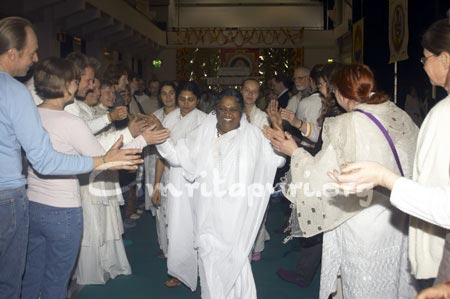 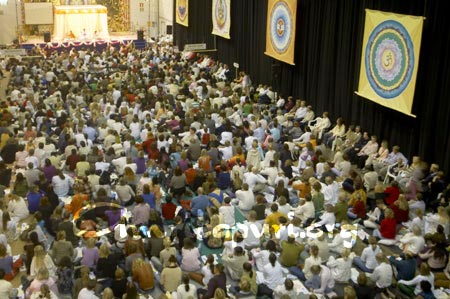