Amma arrived to Kozhikode at 9:45pm from Mangalore for the next two day Brahmasthanam festival on the North Kerala tour.

She was received by the devotees chanting mantras, shouting of Mata Rani, and silent tears of love. Amma then served dinner to all those present. 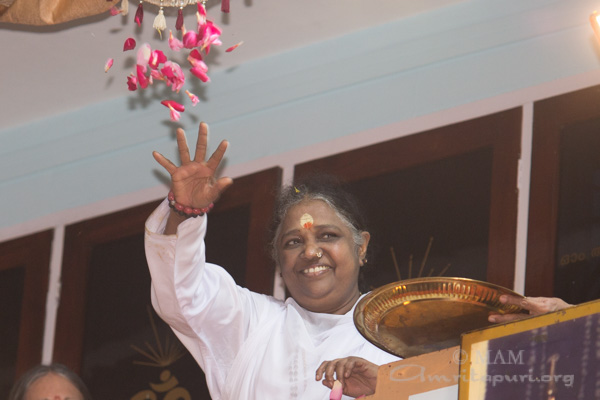 During the first morning morning Amma extended the ashram’s charitable activities in the area by gifting deeds to land for 15 poor families to build their own houses.

Fifty Ayudh members were given ‘Nalpamara trees’ to be planted in public places and temples as part of the Green initiative called ‘Nalpamaram Natinnu Nalvaram.’

Abdul Rahman, who has planted 50 lakhs of fruit trees across the state in the last 25 years, came to receive Amma’s blessing and he presented some of the fruit trees to Amma. 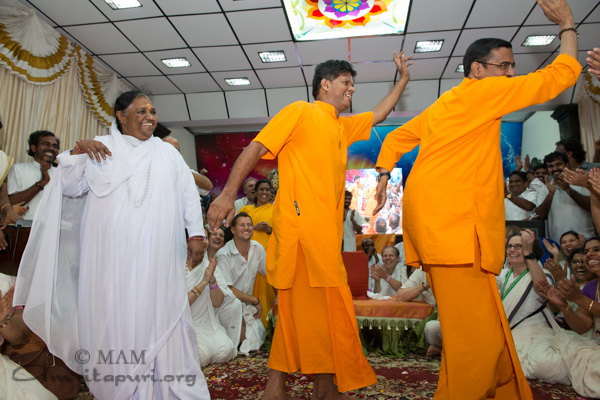 Each day you could see long lines of devotees waiting for darshan with their families.

Many devotees in Kozhikode have special relationship with Amma. For example, one old innocent, sweet lady brought Amma some sweets and offered them during Darshan. Amma asked her where she got the money to buy the sweets. The lady replied she got it from her work as a sweeper. When Amma inquired how much the lady made each day, she told Amma she made 50 rupees (about $0.75 cents) a day…despite that she still decided to buy something to offer Amma. Amma spent some extra time with her, enjoying her innocent faith and devotion.

At the end of the second day Amma danced to the tune of baduga music, and also made several of the brahmacharis come up on stage and dance with her as well.