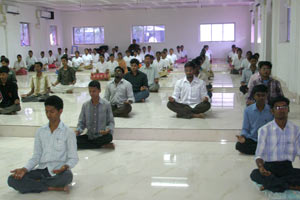 The first classes were taught on July 15 and 16. During that time, three batches of students—two batches of undergraduates and one of postgraduates—were taught.

“At the end of the first day, the students who attended the class were really enthralled by their experience,” said lead instructor Brahmachari Ajamrita Chaitanya. “One boy who attended the course said that when he was coming to the college that morning he was disturbed and full of tension. However, he said that after the IAM classes he felt real peace and mentally fresh. Another told me it was the first time in his life that he had experience real peace and bliss.”

After the completion of the classes, the principal was so impressed with the classes that he requested the brahmacharis to return and teach the remainder of the students. Thus, a second round of classes were taught on 15th and 16th of September. When these were completed, a third set of classes—this time, for teaching and non-teaching staff—was requested.

More classes will be scheduled at Kanchipuram soon.