“Each time Amma has come to Wayanad, She has been greeted by a shower, which is a sign of prosperity and fulfillment,” said Sri. K.K. Ramachandran, the Honourable Minister of Health of Kerala. He was speaking before the 20,000 people sitting through the light shower that had come over the Western Ghat Mountains just before Amma’s arrival at the programme site. 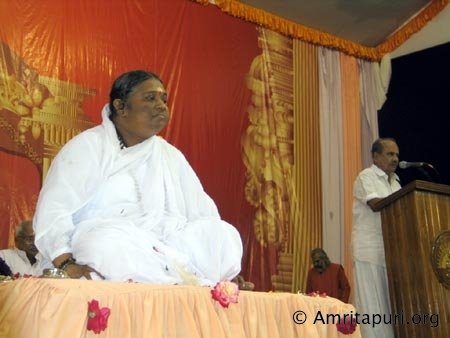 He was right. It usually does rain when Amma gives darshan in the Wayanad District. It even rained the very first time She came here, 12 years ago. At that time, the programme was quickly shifted to inside a nearby school. But today the rain quickly abated and didn’t cause any real problems. It had been two years since Amma had come to the northern Kerala district, and a little damp whether wasn’t going to stop the devotees from having Her darshan.

“Amma is a synonym for auspiciousness and prosperity,” Sri. Ramachandran continued. “Amma has initiated so many projects for helping the poor and needy and for spreading peace and harmony. She has achieved so much that now the whole world recognises and honours Her.It is a matter of pride to all of us Keralites.”

When the rain cleared, a cool breeze filled the night air, carrying Amma’s voice across the mountain-top town.

Amma’s voice was not the only one raised in song tonight. Sri. Girish Puthenchery, the famous film singer, welcomed Amma with a few lines of poetic verse upon Her arrival.

Before Amma began Her satsang, She stood up and asked everyone to join Her in praying for the peace of both those who had died in the recent tsunami, as well as for those they had left behind.

Tomorrow Amma and Her children will travel to Mysore, where She will give darshan for the next two days.