To celebrate Christmas, Amma’s Western children sang carols, performed classical music, put on a play about Jesus’ life and did two dances—one involving fire and one inspiring Amma Herself to raise to Her feet. The evening didn’t end until past 1:00 a.m. Christmas morning, with Amma distributing chocolate-cake prasad to one and all. 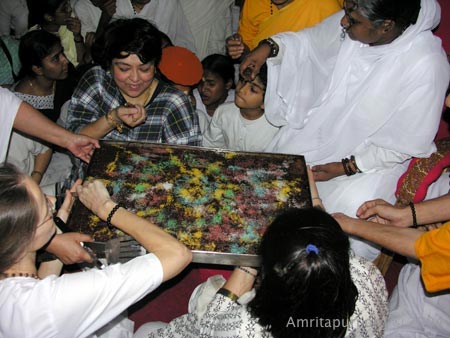 Amma came to the bhajan hall around 10 p.m. and sat in a chair that had been arranged for Her in the middle of all the devotees—which included more than 900 from the West.

The first performance was by a young girl from Alicante, Spain, who sang Christmas carols in the Basque language. Her voice—simple and beautiful—captured everyone’s heart.

Next, a man from Paris and an ashramite from Holland performed an operatic duet and an African American spiritual. Then, the man showed his mastery of the piano with two Western classical pieces, including one by Rachmaninoff. 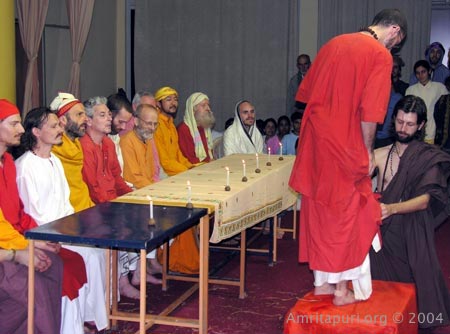 Third was a play depicting four scenes from Jesus’ life. It began with his birth in the manger (which found a shepherd leading one of the ashram calves and three wise men offer prostrations—one from Japan, one from Italy and one from Punjab.) Other scenes included Jesus stopping the stoning of the adulteress with his immortal words,”Let he who is without sin caste the first stone,” and his washing of his 12 disciples feet during the Last Supper.

The next offering to Amma was by a young German lady—a fire-dancer! The lights were dimmed, the music was turned up and the young woman moved about in a fluid, meditative fashion, juggling burning sticks and skipping a flaming rope. Everyone seemed spellbound. 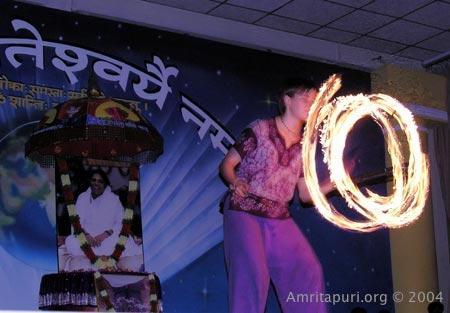 A different type of dance ended the evening; this one put on by Amma’s daughters from all over the West. Using a quotation from the speech Amma delivered at the 2004 Parliament of World’s Religions, they had composed a song with verses in Spanish, English, German, French and Italian. The dance itself was based on the sign language expressions of the words.

May the tree of our life be firmly rooted in the soil of love;
Let good deeds be the leaves on that tree;
May words of kindness form its flowers;
May peace be its fruits.

Let us grow and unfold as one family, united in love so that we may rejoice and celebrate our oneness in a world where peace and contentment prevail.

As the song ended, it really picked up momentum, and soon many in the hall stood up, turned to face Amma and started clapping and dancing around Her. Finally, Amma Herself rose to Her feet and joined in Her children’s celebration.

When the song finally ended, Amma called all of Her children to come get prasad from Her hands—chocolate cake. By the time Amma returned to Her room, it was nearly 2:00 in the morning.