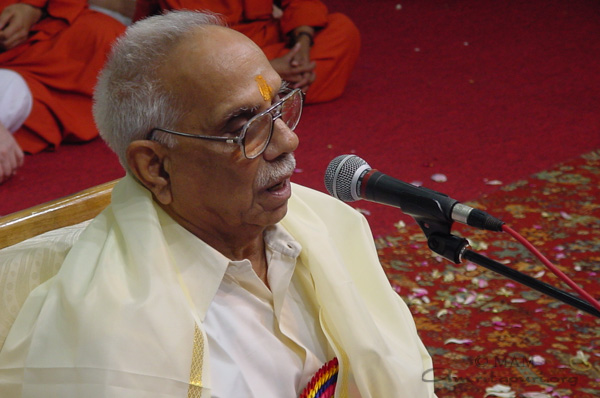 “To worship God as Mother is the easiest and the most natural thing in the world.” Shri. P. Parameshwaran

“Motherhood: The Mother & The Child of Spirituality”

“Most beloved Amma…. Respected chairperson of this session, Dr. Najma Heptulla…. Ms. Yolanda King…. My fellow speakers on the dais… And my dear sisters and brothers…. And the most revered swamijis and sannyasins among the audience….

“The subject given to me for today’s speech is ‘Motherhood: the Mother and the Child of Spirituality.’ I shall confine my talk within the time limit prescribed.

“To worship God as Mother is the easiest and the most natural thing in the world. It is the most spontaneous expression of the human mind. The umbilical cord that unites the child to the mother is a symbolic representation of the spiritual affinity of the child and the mother. The mother is the feeder, the sustainer and the saviour of the child. Father comes later in life. Their relationship also is secondary. Mother is loved and even taken for granted, whereas father is respected from a distance and, more often than not, feared. Even to approach the father, the child seeks the mother’s help.

“The earliest concept of God must have been that of the mother – the Divine Mother, as she is the embodiment of love, she is also the embodiment of power and strength, the adi-shakti [primordial power]. The child sitting in the lap of the mother challenges the whole world. Worship of God as the Mother was common to all ‘pagan’ religions. In India, the tradition continues uninterrupted. God is considered Mother, and mother is looked upon verily as God. The practice of matrupuja [worship of mother] is prevalent among the unsophisticated people of India. Matru devo bhavah, ‘Let the Mother be a Goddess to you’ is a Vedic injunction. There is a practice of offering worship to young girls, looking upon them as female manifestation of the divine on a certain day of the Hindu calendar.

“Mother’s love is spontaneous and unconditional. Whether the child, the son or the daughter, reciprocates or not, mother’s love flows in an unbroken stream. There is a beautiful stanza by Sri Shankaracharya:

“‘Bad sons may be born, but there can never be a bad mother.’

“Every other love can be conditional, motivated, impure, but mother’s love is pure and unconditional because it is basically spiritual. There is nothing comparable. Therefore, in the Hindu tradition, motherhood is the highest ideal that a women can aspire for. The highest is the mother. Once a woman appears in various roles – the daughter, the wife, the mother, etc., but the highest is the mother. Once a woman attains motherhood, she reaches the height of her fulfilment. Even the husband is expected the show reverence to her. Physical, or carnal, desire is transmuted into spiritual love. A real mother develops the sentiments of pure love, unconditional compassion and the attitude of service not only to her physical offspring but to one and all. She becomes the mother of all. It is this high spiritual quality which every woman is expected to cultivate in practice. Motherhood and spiritual enlightenment become synonymous. They are fused into one sublime sentiment.

“Similarly, as one evolves spiritually, he or she unconsciously develops the maternal temperament. The less evolved a person, the more body conscious and the more selfish he or she is. The more evolved a person is, his body consciousness gets reduced. His identification with others increases and he becomes more and more unselfish. Qualities of aggression, assertion and aggrandisement diminish and qualities of caring and sharing, giving and suffering increase. It is this evolution we call as spirituality. Figuratively speaking, it is evolution from the masculine qualities to the feminine qualities. Spiritual evolution attains its highest when one reaches the perfection of feminine qualities – namely, absolute motherhood. The outcome is gentleness, love, affection, even self-sacrifice.

“According to Sri Shankaracharya, this aspect of the Divine Mother is also the most potent and powerful. Here, Dr. Fathima Beevi, quoted the sentence from Saundari Lahari, this sloka by Sri Shankaracharya: how Shiva is incapable even to move without the support of Shakti.

“Mother’s love knows no barriers because, real spirituality is infinite and universal. Love cannot remain a mere emotion or a sentiment. Its nature is such that it breaks all barriers and flows out in acts of service. Wherever there is suffering, instinctively mother’s love reaches out into those areas in whichever form that is most appropriate. Mother’s love does not even discriminate between the wicked and the good, or the deserving and the undeserving. These are distinctions made by human thinking. Mother sees far beyond. Whether one is a saint or a sinner is not of great importance to mother’s love. Probably the sinner and the wicked draw out the mother’s love more than the good and the holy because it is the sinner and the wicked, the socially ostracized and the downtrodden, that need Her care and compassion.