“Non-violence As a Way of Life”

“Today I am very happy to hear non-violence is an eternal truth. It was relevant in the past. It has relevence in the present. And it will continue to have relevance in the future. Neither this world order nor the individual can exist with complete dominance of violence. That is why it is said that lives of all beings depend on each others’ cooperation.
“Without non-violence our society and this world cannot function furthermore. Even for the existence of mankind, non-violence is unavoidable.

“When so much training is being given in violence, does non-violence not require any such training?” —Sadhvi Samani Jyotipragya

“Neither this world order nor the individual can exist with complete dominance of violence. That is why it is said that lives of all beings depend on each others’ cooperation. Without non-violence our society and this world cannot function furthermore. Even for the existence of mankind, non-violence is unavoidable.”We have seen hundreds of soldiers in the armed forces undergoing long hours of rigorous training. They are taught the entire process of war. How much effort is going on for violent ends! The training is so intense and the information transmitted so detailed that it is a long process and, even after that, refresher courses are also organised periodically. It is never allowed to become outdated. So many new developments have taken place. New missiles have come into being: new tanks, new advanced weaponry and new fighter crafts. Anything even a year-old becomes stale, useless, out-dated. One has to be always abreast of new developments. I have heard that in some countries terrorists are being trained.

“The question is posed by the mind: ‘when so much training is being given in violence, does non-violence not require any such training?’ Does it not seem to be required? We have made non-violence dispensable. We talk of non-violence, but the society is getting ready for violence. How will the two strains meet? Today’s society is greatly in need of non-violence, but all effort is being put into training in violence—devising weapons, training in warfare and training in violence. Our desire is in one direction, and action is entirely the opposite. Is this not a contradiction? Is there not a discrepancy? Such a discrepancy makes one laugh and yet experience great regret.

“If there was no anguish in society, the thought of ahimsa [practice of non-violence] would not have occurred in anyone. When the atomic bomb was used in Japan, the whole world was shocked and stricken by the manifestation of violence. The world was attracted to non-violence. During that period, even the belief of those who stood by violence was shaken. One truth came to the fore: if this cycle of violence continues then one day mankind will be wiped out. Under these conditions, the question facing those who believe in ahimsa is: ‘Should they just keep talking of ahimsa? Only simple talking? Only give advice on ahimsa? Or should they take a further step?’

“I feel the efforts taken are not intense enough. Our mind is highly trained in violence. On the basis of this, it has been assumed that violence is the solution to problems. I do not believe that violence is a solution to problems. Today’s situation is that governments will not listen to their people till they resort to violence. And similarly, the people will not listen to their governments unless the police fires a few shots. One understand the language of violence and the other shots. So deep is that psychology that we believe nothing can be done without violence. In such a situation, it does not seem worthwhile to talk only of ahimsa or peace. I am not now talking of violence that occurs in the process of living. I am talking of that violence that disturbs society and throws social organisations into disarray, that which terrorises and frightens the people.

“To gain freedom from this violence, there is great need for training in non-violence. Has it ever been thought necessary to create a well-equipped peace force similar to the police force or armed forces? Just as thousands of people are trained every day to use weaponry to kill, is it not necessary to train people not to kill? One side has been given so much importance, so much emphasis, and the other has been totally ignored, rejected, denied. In this situation, if violence increases in our society, crime increases, murders increase, killing increases, should we be surprised? We have given up one option; we are left without any. This state is a dangerous one. I think there could be new thoughts, a new alternative. If there are 10 to 20 lakh [100,000] people trained in violence, even 10 to 20,000 trained in non-violence could create wonders, could bring forth new events.

“To make this happen, we need a methodology. I would like to discuss one method and one of its aspects: preksha meditation invented by Acharya Mahapragyajji. Sitting in the posture of kayotsarg relaxation, complete relaxation with self-awareness. And through a regular practice of meditation and practicing thoughtlessness. No thought in the mind. To be thoughtless is to be beyond the mind. No memory of the past. No vision of the future. No thought of the present. Free from all three periods. In kayotsarg, even this recognition ceases. All that remains is existence—nothing else. I think there is a need for new thinking in this direction, a thought revolution. Today, there is a great need to make non-violent individuals, and the whole world realises it. For that, a certain methodology is necessary. Preksha-dhyan can fill this gap. With its help, it is possible to develop thoughtless meditation, develop positive thoughts and erase negative thoughts from the mind. If this training is given, the mind can be fairly well-trained and a new personality can emerge. May some people understand this truth and take the step forward. If there is any progress in this direction, it will be beneficial to the whole world.

“Acharya Mahapragyaji—a great and famous philosopher and acharya in the lineage of Bhagavan Mahavira—started his four-year pilgrimage of ahimsa from Rajasthan to Gujarat, Maharastra, Uttar Pradesh, Madhya Pradesh, which will conclude back in Rajasthan. This pilgrimage started on 5 December 2000. Thousands of pilgrims, including Hindus, Muslims and Christians, are training to spread ahimsa, peace, love, compassion, brotherhood and concern for others throughout the world.

“The missions of our reverred Mata Amritanandamayi and Acharya Mahapragyaji are one and the same as far as the spreading of ahimsa and peace throughout the world is concerned.

“A very big religious conference is to take place on 15 October [2003] in Surat in the presence of Acharya Mahapragyaji. President Kalam, too, will be attending this religious conference, on his birthday, to take the blessings of Mahapragyaji. Although already invited, Mata Amritanandamayi is, once again, kindly requested to grace the occassion with Her presence and to help in making our discussions on the task of successfully spreading ahimsa and peace to the whole world. I once again request Amma to make it to the Surat conference and to participate in the discussions.

“The pain has become mountain-like—melt it must.
From this Amritanandamayi Ma, emanate a Ganga must.
From this pilgrimage of peace and ahimsa of Mahapragyaji,
this Ganga will definitely emerge.

“With these thoughts, Om Arhantha. Thank you.” 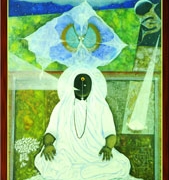 Happy Birthday to You

In the Field: Math Builds Homes in Ambalamugal, Kerala