The question is simple: Can committed, Torah-observant Jews, in good conscience, come to Amma?

Judaism embraces a broad spectrum of people. Many people in the Jewish tradition speak of their identification with Judaism as a connection with their home culture, not only or not exactly with a religion. So nobody is surprised to learn that many Jews are to be found among Amma’s children. The assumption is that Amma’s Jewish children are such “cultural Jews.”

But in San Ramon, this assumption was overturned: In Mother’s lap were Joy and Evan Israel (and their on-the-way child!). The couple characterised themselves as “Torah-observant Jews” who “follow the practices and Commandments” and who are strongly attracted to and influenced by Hasidism.

Wait a minute! Judaism is a patriarchal religion, adamant about there being only one God, and He is male. Surely observant Jews would never be at ease surrounded by images of divinities, nor would they kneel before anyone or anything but God.

Do these two really feel comfortable here with Amma, whom people speak of as an embodiment of the Divine, in a program hall lined with wall-hangings of Hindu deities, where people are approaching Mother on their knees?

Evan Israel explained his position confidently. He had spent several years in Israel “immersed in the Jewish teachings and the path”, “I’m very interested in meeting saints of all traditions, and having met Amma, I’ve been very impressed by just the quality of who She is, and I’ve been drawn to come back over and over.”

So this was not a mistake, a one-time visit after which the two would go home, realising the incompatibility of their way and Amma’s.

In fact, Joy has known Amma for twelve years, Evan Israel for six. “I think we both appreciate the fact that She’s very open to people of all traditions, so we come, and there’s no expectation for us to be Hindu, but we come here from our Jewish path,” explained the husband.

And the wife added simply: “And absorb Her light.” 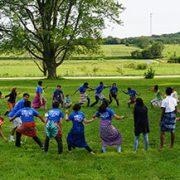 "A Great Woman, A Great Humanitarian & A Great World Leader 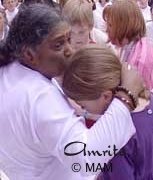 A hope for the world

Create a world filled with Cooperation, Love, Truth and Justice

Blessing a Child of the Survivor Tree

A feather for Mother
Scroll to top