After the last minute changes to Amma’s tour schedule, it was feared that the latest news would not have reached everyone in time and that the programmes there would be smaller than usual. But as you can see from these photographs depicting the Atma Puja which Amma conducted in Zurich just before the first Devi Bhava of Her European Tour, the spacious auditorium was filled with devotees, no doubt happy to be once again in the lap of the Divine Mother.

“Her followers believe that she possesses the gift of removing pain and giving hope to the people,” says Reuters, international news agency reporting from Zurich on 17 October, 2001 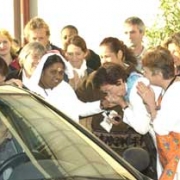 All God's children in Mother's Lap