Michigan State representative Diane Slavens visited the Amma Center of Michigan in Ann Arbor to present a Proclamation on behalf of the State of Michigan to Amma commemorating Amma’s 60th birthday. Representative Slavens fondly remembers the heart-warming darshan and thanks Amma for the love and joy she has been giving to tens of thousands of people worldwide. She conveyed her warm birthday wishes to Amma on behalf of her colleagues and herself. 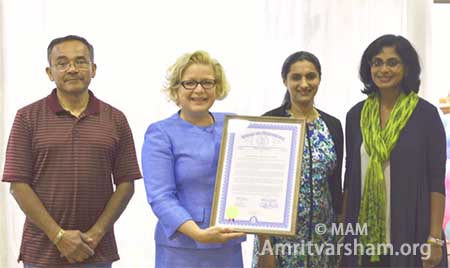