Blog - Latest News
You are here: Home / Birthday / Baul of Bengal – “Song of the Great Soul”

The stage was adorned with flowered light patterns of varying colors. Bouquets of fresh flowers lined every part of the stage. The cameras covered every inch of the stage, giving devotees some amazing and powerful shots. Our beloved Amma’s 60th Birthday. The air of divine love that exists here in Amritapuri was amplified by the soul stirring performance of Parvathi Baul, one of the most popular practitioners of Baul music all over the world.

Parvathy Baul is a singer, painter and storyteller from West Bengal. After studying visual arts at the Kala Bhavan at Shantiniketan, she had the chance to come into contact with the living tradition of Baul. A huge turning point for her, she decided to undergo self training in Baul, rather than pursue a conventional degree (After listening to a mendicant on a suburban train, she set off to find her guru). She has performed in locations such as Paris, Beirut, Geneva and Japan. She has brought her talent down south to Kerala 15 years ago, under the guidance of her guru, Muslim fakir kalandar Abdul Salam, and also performs in remote villages in many parts of Kerala.

Adorned in a simple sari, with her long flowing hair , her soulful voice rang across the hall, captivating all present there. She reminded of a sant from yesteryear India, traveling along, singing praises of the Lord. One hand playing the ektara (one stringed drone instrument) , the other playing the dugi (a small hand held drum), she moved across the stage rhythmically. Her powerful voice at times reached dizzying heights, and at times was a mere whisper. She rendered some melodious numbers, one was of Mata Kali, praising the dark skinned one for shedding light to the world; and then went a song that was the favorite of Sri Ramakrishna Paramahamsa. An animated performer, her smile, hand gestures and anklets chimed with her graceful movements. The audience too, were enthralled at piety, her sweet voice and the immensely spiritual environment. As she sang, “Janani! Janani!”, the audience could not help but feel the rush of divine vibration, with our beloved Janani sitting right there, giving darshan. 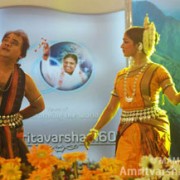 The Vidya behind Tala Vadya 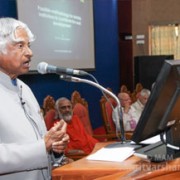 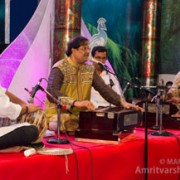