Pandit Ajoy Chakraborty has many “firsts” to his credit. He is the first Indian Classical vocalist
• to be considered the best performer of all kinds of Indian Vocal Music
• to receive the “Kumar Gandharva Award”
• to receive the President’s award for the best male playback singer (in 1990)
• to be invited by the Government of Pakistan to perform in Pakistan
• who has been spanning the cultural gulf between India and the west through extensive musical tours by adapting Indian Classical Music to a universal expression of feeling. 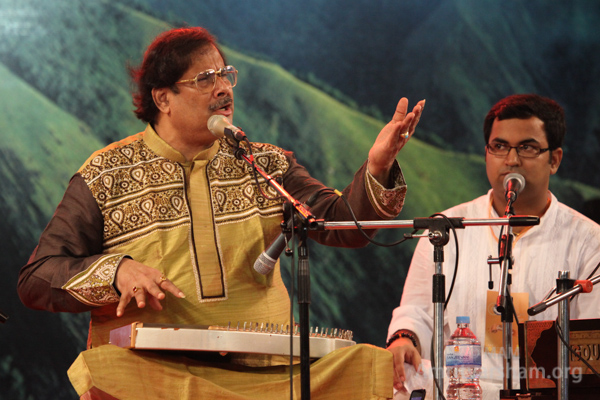 His abhangs poured out bhakti (devotion) aptly starting with a sloka paying tribute to the Guru. The momentum picked up with an abhang on the praise of Lord Shiva. The sangathis and the modulations were simply astounding, with various combinations and offered complete justice to the Raaga. The melody and the vibrations of his voice mixed with the bhava, or the emotional energy, felt heavenly. The forty five minute concert had a fitting conclusion with a Tillana – a form of classical music, focused on “Thaala” (rhythm) notes, composed by the legendary Dr. Balamurali Krishna.
Panditji paid his tribute to Amma: “I feel so lucky to come and touch Mother’s feet. It is my first time… I have never experienced such blessings ever in my life.” He offered pranams to Amma and poured adulations, saying “Amma is the Mother of the Universe, the mother of the country and the mother of the whole world. I pray to Almighty for world peace through her blessings”. 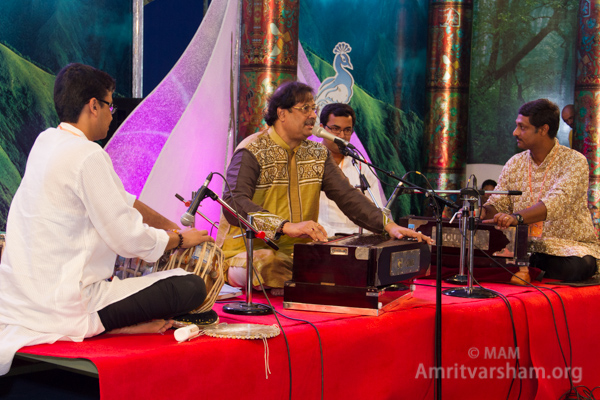 Most notably inspiring were the lyrics of the main song – Moko kaha dhoondhu re bande main tho tere paas mein (“Where do you search for me oh humble seeker, I am within you!”). For Amma’s children, it is Mother’s call to seek her inside, enshrined in the devotee’s heart forever & forever.