Amritavarsham60 had seen some iconic performers, and some mind blowing offerings of prayer and art. Tonight was no different, with clarinet whiz Shankar Tucker and the famous world music band Maati Baani, and the great singer Mame Khan. 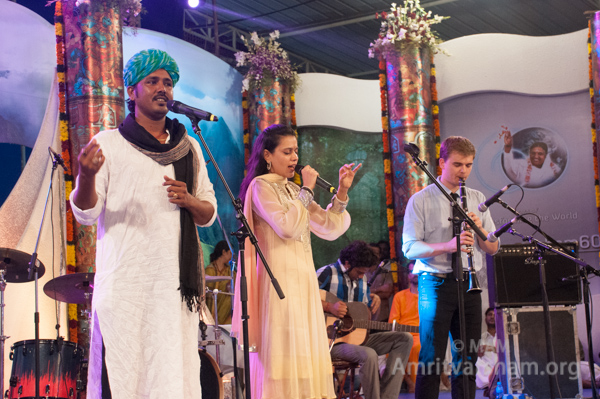 Shankar Tucker is a clarinetist and composer based in the USA and a devotee of Amma. Growing up in Massachusetts, he was christened Shankar by Amma. He was drawn towards Indian classical music through the works of John McLaughlin. After learning orchestral clarinet performance at the New England Conservatory, he then became a student of Peter Row, a sitar player. He then received a grant to study under the flute maestro Hariprasad Chaurasia, also one of the icons that performed here. His online music series called ‘The Shruti Box’ is a hit worldwide through YouTube and SoundCloud.

Maati Baani means Language of the Earth, and they work on collaborating with artists from rural areas, street musicians and top class artists from around the world. Their recent composition, ‘Tore Matware Naina’, a blend of Hindustani and French was featured in the movie hit ‘David’.

The power packed ensemble included vocals from Nirali Kartik, Vidya Iyer and Rohan Kymal, with Kartik Shah and Akshay Dwivedi on guitar, Puneet Gabriel and Sarthak Mudgal on the percussions. 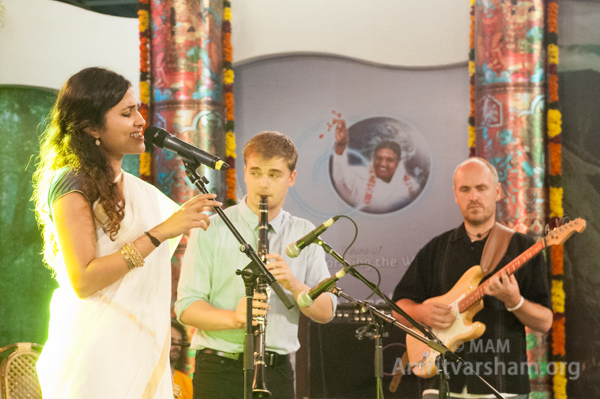 Their first performance was the upbeat, foot tapping number, ‘Tore Matware Naina’, with Nirali mesmerizing the audience with her sweet, dynamic vocals, and Shankar accompanying masterfully on the clarinet. The songs began with slow, melodious rendering of the clarinet, with the vocals and percussions creating an atmosphere of the true celebration that this day really is. Mame Khan brought the ever enchanting sufi element into the proceedings, with his deep, resounding vocals touching the minds of all present. Vidya Iyer’s soothing vocals in ‘Rang Lo’ and the hit song ‘Munbe Vaa’ set the right balance with the audience of eager university students. Rohan Kymal’s ‘Caught in the Rain’ left the audience truly refreshed, and his hit number ‘Ore Piya’ and ‘Rolling in the Deep’ brought the crowd to their feet! Nirali and Vidya combined for a beautiful duet that once again sparked great enthusiasm among the devotees.

It was wonderful to see such a diverse variety of performers unite through music, and it was touching to see them offer their hearts and souls to Amma with immense prayer and devotion. As Vidya Iyer aptly put it at the end of the performance, “Thank you Amma, We love you… Happy Birthday!”