Amma’s first program in Delhi was in the Indira Gandhi Indoor Stadium,   just across the street from Raj Ghat, the samadhi site of Mahatma Gandhi. A number of dignitaries from the nation’s capital graced the dais for Amma’s satsang and bhajans, including Smt. Sheila Dikshit, the Honourable Chief Minister of Delhi, who said, “Every time Amma comes to Delhi, Delhi is blessed.” 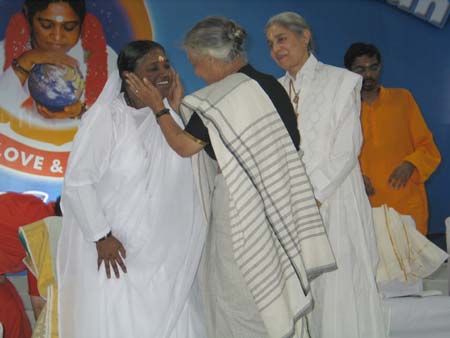 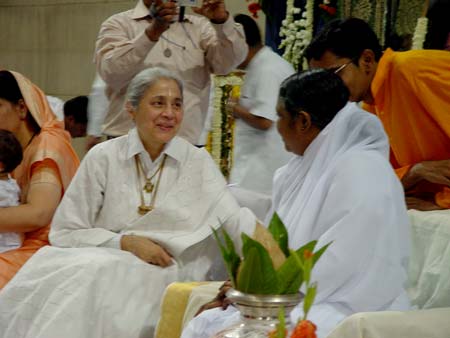 Smt. Indu Jain, the Chairman of Times of India Group, also participated in the check distribution. She then delivered a speech, where upon she said, “Today people are coming to India from around the world to receive spiritual knowledge from Amma.”

Shri. Vijay Goel, the Honourable Minister of State for Youth Affairs & Sports, also gave a speech, saying,   “Amma meets everyone, big or small, with the same attitude of Mother’s love.”

Two books were released during the function, a souvenir of visit to Delhi and Amritavarsham50, a retrospective of the four days of celebrations surrounding Amma’s 50 th birthday. Participating in the release of the Delhi souvenir were Shri. Chaman Lal Gupta and Shri. Ashok Ganguly, Chairman, CBSE. Participating in the release of the Amritavarsham50 book were Shri. Vikram Verma and Smt. Indu Jain.