The last afternoon darshan in Coimbatore. The stage is packed-as usual. But the majority of devotees seated there to Mother’s left are children, girls and boys in green-checked uniforms. Why is there so much space between them? Ah! Many are sitting with their legs stretched out in front. Their legs are in braces. They range in age from five or six to fourteen or fifteen years. And most if not all of them have come to see Amma for the first time.

They are from The Society for the Aid of Handicapped Children, which for thirty years has served the needs of the handicapped in Coimbatore. Today, the children have come to meet Mother at Her “home” (one of Her many homes: the ashram), for, as She has explained, for Her to accept their invitation for a daytime visit to their home would result in too huge a crowd.

Each child has already had his or her personal darshan-Mother’s embrace and whispered endearments. Now each gets a chance, for one minute, to hand Amma the prasad (a sweet wrapped in a small envelope of sacred ash) that She will then give to each person who comes to Her lap. No child is left out. Leg braces make getting into position next to Mother difficult, so adjustments are made: some children sit or kneel on the stage next to Mother’s peetham, but those who can’t adopt this regular position are helped-supported or actually lifted-onto the peetham itself, and they sit in whatever fashion works.

One of the adults from the Society is just next to the prasad-giver, helping the child to know when to place the prasad packet in Mother’s Hand, and sometimes helping him or her to stretch far enough. The minute someone’s turn is up, another helper is there to lift the child away and move the next one into place.

After all the children have handed Mother prasad, there is a mass exodus. You can tell the kids are experienced at moving themselves even without their crutches: they scoot along the stage floor, propelled by their hands, and at the edge an adult lifts down those who need the help. There are chairs on the ground near the stage, and here the children sit until the end of the program. The ashram videographer, knowing they are new members of Amma’s “family”, starts videoing them-with the camera’s screen turned so that they can see themselves! A girl recognizes herself and breaks out into a grin; her friend in the next chair shyly hides behind her hands; the boy next to her salutes, while his buddy looks startled and then ducks behind his friend’s shoulder. Kids are kids, handicapped or not; these kids warm up to the camera, and the game goes on. There’s one member of the group who isn’t so young. He appears to be well over fifty or sixty. His skeletal legs are essentially useless appendages suspended in front of him as he balances on his tailbone on a small “seat”. He moves himself about by the strength of his hands, which hold solid blocks to protect them, as shoes do feet. He laughs contagiously, sitting there on the ground near the kids, playing for the camera just as uninhibitedly as they. You know he is one of their family when the Amma doll that was being passed from hand to hand among the children ends up cradled in his arms, and he is smiling beatifically. (This man, we were later to learn, lived in a beggar community where the Institute began some thirty years back. The beggars were sent to various other shelters…but he absolutely did not want to leave. It was agreed that he could stay, and he now epitomises the Institute’s philosophy that the handicapped can face their disabilities and be contributing members of a community: he-yes, he, scooting along the ground by hand-power-is now the gatekeeper/watchman at the Institute.)

Nearly five in the afternoon; darshan must finally come to an end so that the area can be set up for the Sani Puja, the last program of Amma’s Coimbatore visit. The children are still seated at the side of the stage when Mother rises, salutes the crowd, and turns to go to Her room. At the edge of the stage, She pauses, and looks down at the eager faces of the children. She steps down and tousles the hair of the boy closest to Her path. She playfully pats the next child, too, and then stops and holds the third child close for a moment, gazing at all the others as if to say, “This hug is for you, too.” You can see the reluctance on both sides, Hers and the kids’, as She finally moves away and heads up the stairs to her room.

Some of the children walk fairly well on their own; some just need someone’s steadying hand; the others wait until someone hands them their crutches, and then the group is moving fast-out to the parking lot and up the bus steps with the aid of a friendly boost or someone’s strongly lifting arms. More happy faces are at the bus windows; salutes and waves and “Bye bye!” and the day’s big outing is coming to an end.

That is NOT the end of the story.

Despite Amma’s protestations that She really couldn’t go, in daytime, to the Society for the Aid of Handicapped Children, She did.

Next morning, at just about the time that families of non-residents were bringing their children for physiotherapy, and just when traffic for the nearby produce market was growing heaviest, Her car turned in at the front gate. She had promised that She would stop by briefly before leaving town, but everyone had supposed that meant before dawn (it was assumed that She would leave straight after darshan). But here it was, full daylight, and Amma was walking in the front door!

To Her right was a small display: medals and cups the children had won in Special Olympics and other athletic events; handmade greeting cards and envelopes, and handkerchiefs with embroidered edges. These are tangible proofs of the children successes in two of the goals of the Society: to help them “overcome the handicap and be a part of society” and to provide “meaningful vocational training to enable the handicapped to become economically self dependent.” These cards and handkerchiefs, along with other items the children learn to make in their Occupational Therapy classes, are sold. Mother was visibly impressed by the fine artistry on the cards and hankies; She looked closely at them, holding them with Her gentle fingers.

The children were in the prayer hall, about to go for breakfast, but of course they stayed put when Mother walked in! Amma moved straight over to where the kids were sitting on the floor. Someone placed a chair for Her, and She sat for a moment, but in the end She couldn’t stay so far away, so She abandoned the chair and squatted down near the children. Handing a banana to this girl, an apple to that boy, a handful of nuts to that other child, She saw to it that everyone received prasad from Her Hands. Her Hands – such expressive Hands – expressive, indeed: for recognizing that the handicap of some of the children was deafness, She began signing! Now here is a language that bridges the gap between Malayalam and Tamil! She signed, they signed back-successful communication! Fondly caressing the hair of the child nearest Her as She finally stood up, Mother looked lingeringly into all the faces there, and then turned to bless their home’s prayer room with a puja before She left.

Most people who had been touring for two and a half months and who had finished their scheduled programs would have made a beeline for home. Mother, characteristically, set aside the natural longing for an end to travel and stopped a while to bless some very special children.

Her visit was a blessing to others as well, for it was a reminder of one of Her frequently repeated teachings: we often cannot change external circumstances completely to our satisfaction; what we need to do then is to change our inside responses. The Society for the Aid of Handicapped Children certainly makes every effort to change externals-it provides surgery, physical therapy, occupational therapy, work opportunities for people whom the ordinary work-world too often overlooks-but in the end the children still are amputees, or deaf, or mentally challenged.

What a blessing that the Society also has great success at helping the children develop positive mental attitudes about themselves and about coping with life as they find it. They are taught to seek a balance of effort and acceptance: another of Mother’s essential messages. No wonder Her Heart couldn’t resist the pull of their longings for Her visit! 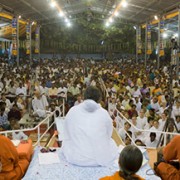 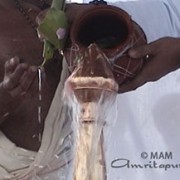