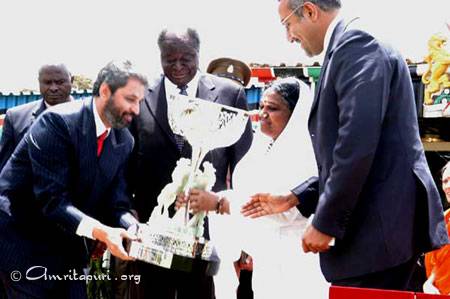 Her Holiness Sri Mata Amritanandamayi (Amma) presented the prestigious Gandhi-King award for Non-Violence for the year 2003 to His Excellency the President of Kenya, Hon. Mwai Kibaki, today at the State House Gardens, Nairobi, Kenya.

Also present were the First Lady Her Excellency Mrs. Lucy Kibaki, the Honourable Vice President Mr. Moody Awori, the Honourable Minister Mr. Najib Balala, for Culture, Sports and Social Services and Bawa Jain, the Secretary General of the Millennium World Peace Summit. The Kenyan Cabinet members and many special invitees were also present on this momentous ocassion. The gathering was addressed by Amma, Mr. Balala, Mr. Jain, and His Excellency the President. Earlier in the morning Amma had a private meeting with the Honourable President at his residence.

Amma praised President Kibaki’s reforms and the introduction of free primary education in Her presentation address.

Accepting the award, Mr. Kibaki praised the World Movement for Non-Violence and the Millennium World Peace Summit for their role in the promotion of peace, and paid tribute to the previous award recipients, which include Amma, UN Secretary General Kofi Annan, former South African President Nelson Mandela and renowned primatologist Jane Goodall. 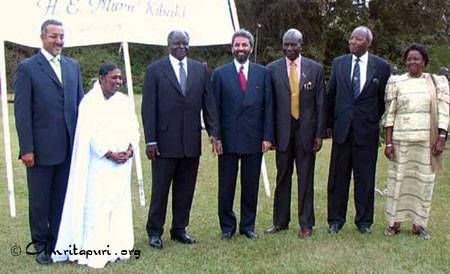 Dedicating this award to the people of Kenya, Mr. Kibaki said, “This award is in the spirit of the two greatest leaders of our times – Mahatma Gandhi and Martin Luther King – who transcended what we think of as apolitical, civic, or spiritual leadership to become true leaders of people and examples to hearts, minds and souls worldwide.”

On Her arrival in Kenya on the 22nd, Amma was welcomed at the Nairobi airport by the Honorable Minister Najib Balala MP on behalf of the Kenyan government.