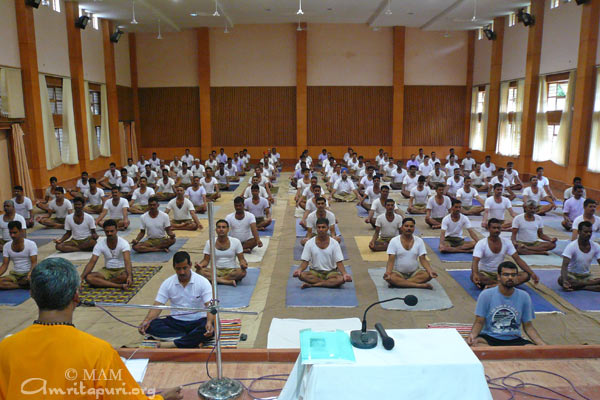 Here in India, amongst others, classes were conducted, in Hyderabad during the third week of June, at the Central Industrial Security Force, in Vellore on 14th – 16th July, and at the AIMS Hospital in the last week of July.

In Hyderabad, 3 different IAM classes, were conducted by Brahmachari Nijamritha Chaitanya. Around 50 devotees participated in the 2-day course held on 20th and 21st July. The participants shared that they felt closer to Amma learning and practicing the technique. Later, Nijamrita Chaitanya also conducted a 2-day Corporate IAM course for the engineers who study at AICT Hyderabad, and a Children IAM course for the students of Amrita Vidyalayam, during a 3-day children camp.

A total of 305 personnel, including 20 officers, attended the course. Many of the participants came from various parts of South India for the course. The DIG in charge said that Amma was doing the greatest social service by distributing peace through the free meditation courses.

Students from a nearby Central School also attended the course. 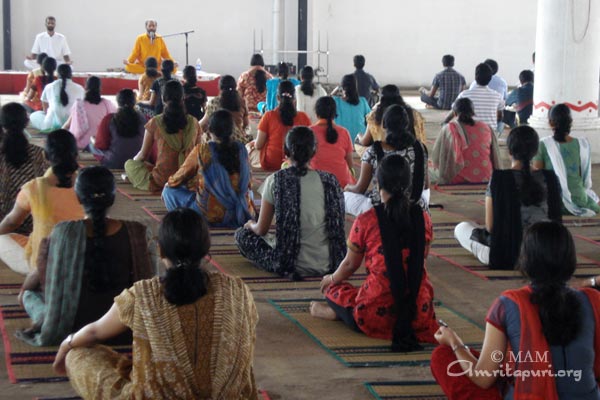 At the AIMS Hospital, Brahmachari Yogamrita Chaitanya conducted a course for the 2009 batches of Medical School students, in the last week of July. Around 160 students attended the courses with great enthusiasm.

Classes were held in Barwah, Devali and Gaziabad by Brahmachari Vijayamrita Chaitanya for the jawans, officers and the other members of the families of the armed forces personnel during the months of June & July. The response to the classses was overwhelming. It was a fulfilling both for the instructors – who felt a sense of deep peace and fulfillment and a heightened awareness.

“After the two day IAM camp I was able to make out who amongst the Jawans had attended the camp and who had not – there was tranquility and the joy on the faces of those who had attended” – Sri. B.D. Sharma, Senior Commandant, CISF

“I attended the IAM camp so that I could have more concentration and awareness in the prayers that I used to do as per my Christian upbringing. Having attended the camp I am sure that doing IAM on a daily basis will definitely give me that.” – Joy, Jawan.

“I have been in CISF for 16 years. And in these 16 years this is the first time that I have been able to sleep well, without tension.” – Ram Gopal, Cisf Training Center, Mundali, Orissa