Blog - Latest News
You are here: Home / We are blessed to live with Amma

Upon Amma’s 13th visit to the Washington D.C. area, she was welcomed by former Indian Ambassador T.P. Srinivasan and Rajiv Ranjan, a representative of the Ambassador of India to the United States, Meera Shankar.

T.P. Srinivasan, who has met with Amma several times over the past 10 years and was born only two miles from the village of Amma’s birth, praised Amma as one who not only speaks spirituality but puts its teachings into action through her life.

Rajiv Ranjan also addressed the gathering. He said, “Amma is an inspiration to all of us. She symbolizes the collective spiritual wisdom, social consciousness and compassion of India. Her efforts at rehabilitation and integration of the weakest, the most needy and disadvantaged throughout India, Africa and the rest of the world are without parallel.”

Rajiv Ranjan concluded by presenting Amma with a plaque on behalf of Ambassador Sankar in recognition of Amma’s “global humanitarian work and environmental conservation efforts.” 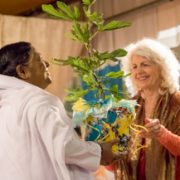 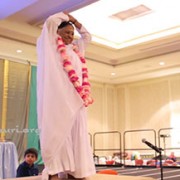