Amma was giving darshan in Kodungallur, Kerala when one of the worst earthquakes in Indian history hit Bhuj, Gujarat. It measured 6.9 on the Richter Scale. The initial reports were bad—buildings were rubble, entire villages had been razed, and the injured and the dead were uncountable. Amma asked the Kodungallur devotees to pray.

Amma’s immediate response was to send a 12-person medical team from AIMS, M.A. Math’s Super Specialty Hospital, along with two fully equipped ambulances to the region.

The team comprised one general surgeon, two neurosurgeons, an orthopaediatrician, two anaesthesiologists and a paediatrician. There were also three nurses, a biomedical engineer and four ambulance drivers.

The ambulances supported inbuilt operation theaters and were stocked with Rs. 2,000,000-worth of medicine as well as an equal amount of surgical equipment. Amma also made arrangements for around 100 student and staff volunteers from various Amrita institutions to participate in the relief efforts.

“Our medical facilities, being sophisticated, came as a great boon to the locals,” says Brahmachari Abhayamrita Chaitanya, one of Amma’s disciples sent to the area. “On day one itself, our doctors took care of nearly 600 cases. People with fractured limbs were given expert orthopaedic care and people with deep wounds on their body and heads were also treated.”

The surgeons performed operations day and night without rest. The medical team from the Math was able to save 40 lives from a collapsed school, and right inside the ambulances eight babies were delivered, one of which was born after a Cesarean operation. “On the second day, we were woken up at 1 a.m. by a man asking for help in the delivery of his wife,” says Br. Abhayamrita. “Our doctors had to assist in a few delivery cases like this, as the local hospital was totally devastated, and a few nurses had died.”

The conditions were tough – bitter cold, Spartan facilities, lack of proper food, and utter confusion prevailing in the town. Regardless, the student volunteers rose to the occasion, cooking food and serving food, distributing water sachets supplied by well-wishers and devotees, clearing debris so that ambulances could ply the route, promoting general sanitation.

They also assisted the doctors in shifting patients in stretchers, sorting the medicines, and consoling the people.

On the second day, a man who was the sole survivor in his family came to the Math’s Relief Post. Excavators were clearing the debris burying his family. He was afraid that the bodies of his loved ones would be mutilated. “Our student volunteers, under the leadership of ashramites, used crowbars and their bare hands to clear the debris, and recovered the dead bodies of all six of his family members,” says Br. Abhayamrita. “The hapless man was weeping because of the pain of separation, and because he was, at last, able to see the bodies of his loved ones. He also expressed his gratitude to our volunteers. The students were really moved by the scene. We then removed the bodies to the crematorium nearby.”

All in all, the team visited 25 villages, distributing food articles, water and clothes, and providing medical care. After two days, they started concentrating on five villages, namely Kokera, Dagara, Mokhana, Modsar and Jawar Nagar. In most of these villages, there were Hindus as well as Muslims.

“In each of the villages we visited, we had to literally search and find the injured people,” says Br. Ashok, a neurosurgeon from AIMS. “Those with big fractures often had inadequate splints, and sometimes casting had been done without X-rays. So, the fractures had to be checked and reset. We had to check them all. Even two weeks after the quake, we could still find children with long bone fractures that needed setting. Oftentimes, the villagers did not realise the seriousness of their condition. We explained that their children would be crippled if they were not taken care of properly.”

At Jawar Nagar, the Math team found a group of women lying on cots in a tent. Amongst them was a 20-year-old girl named Geeta. “She was suffering from femur and unstable pelvic fractures, and it was already the seventh day after the quake,” says Br. Ashok. “Her mother and three sisters had died. Her father and brother were with her. Next to her was a nine year-old girl with a pelvic fracture. She had not been diagnosed at all. Her mother had forearm fractures that were not set properly. All three of them were simply lying in pain side-by-side in a hut. We took all three of them back to our base camp and had X-rays done. We took Geeta to the nearest port-city, and arranged for her to be transferred to Mumbai, where she underwent surgery and is presently doing well. Devotees in Mumbai visited her in the hospital there to make her feel at home.”

Most of these days, the team survived mainly on biscuits and water, their only real meal at night. “For us, encouragement took the form of the smiling faces of recovered patients and the warmth of villagers,” says Abhayamrita. “The greatest encouragement was, of course, Amma who called our mobile phone a couple of times at about midnight.” 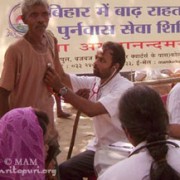 One million dollar for Katrina victims

Rebuilding the villages in Gujarat Earthquake 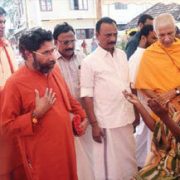