24 – 25 Mar – Bharata Yatra 2009, Bangalore, Karnataka
The Brahmasthanam Festival was celebrated with lot of gaiety and enthusiasm in Bangalore. Ten elderly and physically challenged people were given monthly pensions as part of the Amrita Nidhi project. Many Amrita University students volunteered their time and energy to selflessly serve the crowds during the two-day festival.  Since Amma has not visited the North Indian states this year, one could see a lot of devotees from the North attending the function here.

Students from Amrita University and Amrita Vidyalyam staged cultural presentations of various dances and Yakshagana during the two-day programmes in Bangalore. Students of Amrita University presented a wonderful music drama on Ramayana based on Sri Ramacharita manas of Tulsi Das. 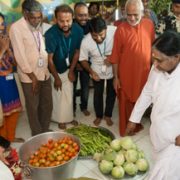 We have to turn inward for inspiration 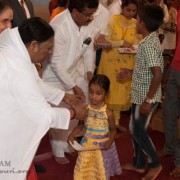 A sympathetic heart is a fountain showering contentment

Amma in Mysore Amma’s Programmes in April
Scroll to top