Amma arrived in Kochi after her programs in Thrissur. Amma was received with ‘poornakumbham’ by Guruvayur Sree Krishna Temple Thantri Chennas Dinesan Namboothirippad. Hundreds of devotees had assembled in the darshan line near the gate of the Ashram grounds hours in advance. While standing at the doorstep of her camper, Amma touched all of them as the vehicle drove into the ashram grounds. Amma then led a meditation and prayer session, served dinner and prasad, and sang bhajans. 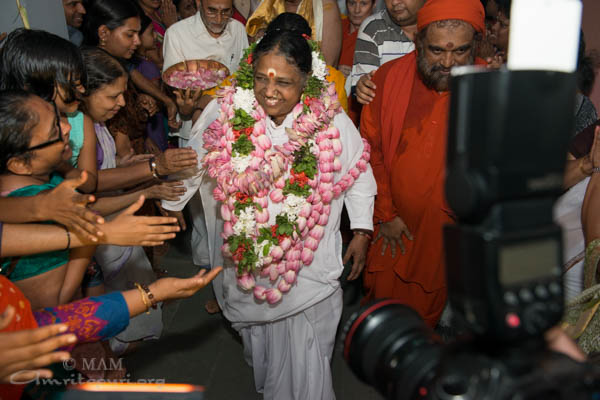 Mayor Toni Chammany welcomed Amma to Kochi. While addressing the crowd he said: “Amma is a great personality who is showing the world what spirituality is through action and how to serve humanity through various activities. For her faith is not just lip service, it is an activity to help the poor. This we can see if we analyze the activities of the Ashram. Wherever natural calamities happen, with the touch of compassion, MAM reaches to any corner of the world.”

Kochi Mayor also thanked Amma for supporting the development plans of the city. “We came to Amma asking for a flower, she gave us a garden.” 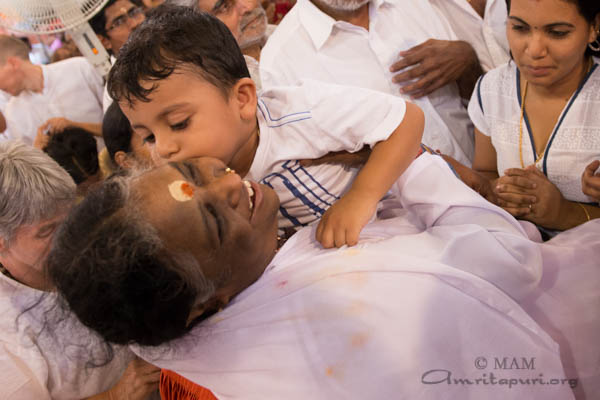 MAM has taken up the project of building toilets for 1200 families in Kochi who don’t have these facilities. Free toilets will be built for the poor, directed by the Kochi Corporation.

“Many times, what political leadership and local governments are not able to do, MAM takes up and contributes for the development of the nation. This gives us, the people’s representatives, lots of strength,” said Hibi Eden, the local MLA.

Addressing the gathering, ADGP Sreelekha opined that the nation should honour the services of Mata Amritanandamayi by bestowing her with the highest civilian honour of Bharat Ratna.
Addressing the devotees, Amma said, “If the economic advancement of a nation fails to ensure the well-being and happiness of its citizens, there is a serious flaw in the process.” Amma emphasised the need for balanced development that weighs ethical and cultural values along with economic growth. “Currently, the progress of a country is being gauged on the basis of its gross domestic product (GDP). But the world has started to realise that GDP does not reflect true growth,” she said. “Economic growth is just one factor. If the citizens are not happy and contended, there will be serious lapses in the development process. Money alone cannot ensure happiness – which needs ethics and cultural values. Otherwise, it is like putting makeup on a dead body,”

Drawing a parallel between the recent Ebola epidemic and hatred, Amma said, “The Ebola virus that spread over parts of Africa has become a nightmare for the whole world. It has wiped out thousands of humans. But the virus of hatred is killing more than any epidemic. The antidote for hatred is within us – love and kindness”.

“Humanity is said to be blamed for the occurrence of natural calamities. And it is a warning to us for to make corrections. Conservation of nature is one of the most important issues to be taken care of. We should imbibe the spirit of conservation and the values of natural co-existence of ancient tribal peoples,” she added. “One of the major contributions of India to the world was the concept of the number ‘zero’. We should add something more with zero; zero poverty, zero waste, zero illiteracy and zero crime, and be a model to the whole world.”