Amma reached New Delhi, the last stop of the 2nd leg of Bharata Yatra 2015, at 4.19am on March 28. It had been a two day trip from Ahmedabad, with an overnight stay in the holy city of Pushkar. 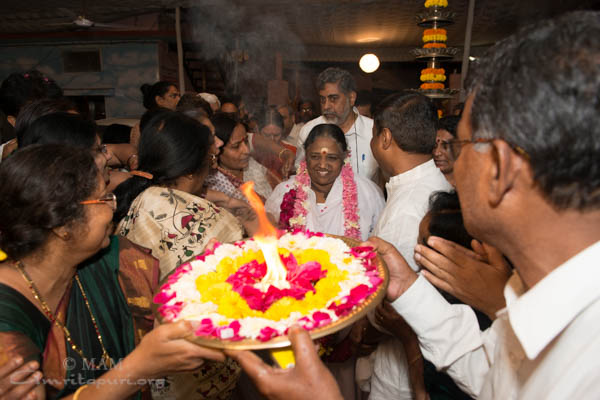 Later that day, Amma was invited to the Prime Ministers office. In a private meeting with Narendra Modi, the PM requested Amma to contribute to the Namami Gange Cleanup project, to which Amma gladly agreed {news}.

Upon her return to the ashram, Amma served dinner to the Delhi devotees and tour group, sang bhajans and joined everyone in a guided meditation and prayer for world peace.

Throughout this tour Amma has personally served a total of over 30,000 meals to the tour group, volunteers and devotees.

During the public function on March 29, Kishenpal Gujjer, Minister for Social Justice and Empowerment handed over Vidyamritam scholarships to deserving children from the Northern region.

Both days of programmes saw a humongous crowd, including people from the states of Rajasthan, Uttarpradesh, Bihar, Uttarakhand, Punjab and Kashmir. Many devotees from these states came from the villages that MAM has adopted as part of its self-reliance and empowerment scheme. 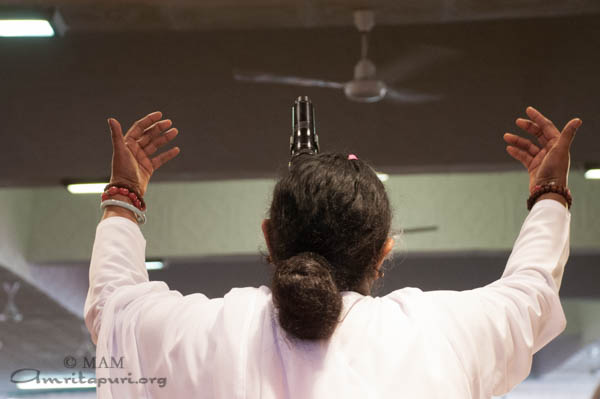 Children from Uttarakhand as well as students of Amrita Vidyalayam offered a variety of cultural programmes.

After the extremely hot climate in most preceding programme locations, Delhi provided a pleasant change in weather, with light rainfalls and fresh air. It was as if tender showers of grace came down as a sign of blessing for the end of the tour. It had been an incredible journey, a pilgrimage that surely is unique in todays world. A total of 23 vehicles, including eleven buses, two trucks and an ambulance, traveled over 3000 km to ten programme locations in six Indian states. The tour group included a kitchen crew, equipped to cater for tens of thousands of people, sound system, videography, bookstall and recycling teams.

Once again, Amma had blessed hundreds of thousands of people with her embrace, instilling hope, faith and love in the hearts of those who came to seek her presence.

From here Amma will fly to Singapore, Malaysia and Australia to meet her children waiting there.