Hundreds of the Kozhikode devotees were lined up holding brass trays of flowers and puja lamps when the tour group arrived at the ashram at 5:30 in the evening. Amma was not expected to arrive until 7:30 pm. The Kozhikode devotees who were lined up five or six deep, along the path to the stage were not deterred by the long wait. They were fixed to their spot, anticipating the happy moment on Amma’s arrival they would be able to catch their first glimpse of Amma. 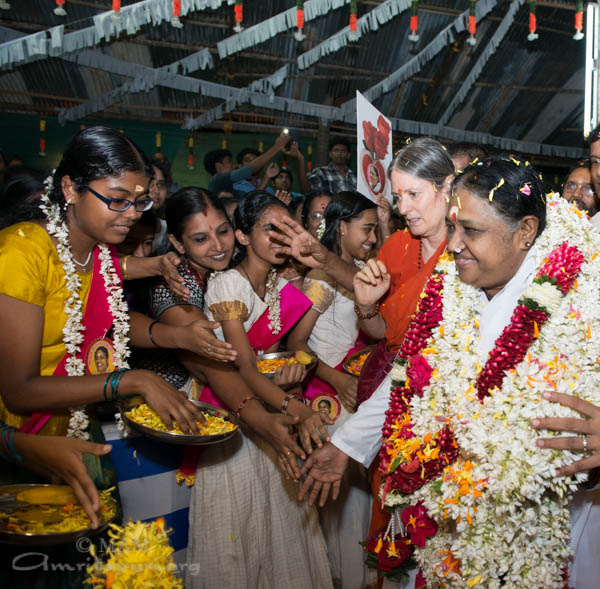 As word of Amma’s car approaching the chanting of “Om Amriteswaryai Namah” by the devotees reached a fevered pitch as Amma stepped out of the car.

Amma walked through the hall accepting, one by one, flowers offered by the devotees. The devotees moved towards Amma, their devotion overflowing with uncontrollable cries of “Amma!”

Amma went to sit directly on the small stage, where she began to sing bhajans followed by meditation. She then distributed prasad plates to one and all, smiling at all sitting before her. It was past 9:30 pm when Amma climbed the steps to her room. She looked through the curtains from the balcony overlooking the hall and smiled beatifically at the devotees down below. The devotees swayed to and fro as one, with hands pressed together in prayer, gazing up at Amma, calling her name.

Amma threw flowers petals down and the devotees’ arms outstretched to catch the blessed petals. Amma stretched her arms as if to embrace the whole group and brought her hands to Her heart; as if sweeping all the devotees to reside in her Infinite love.

Among the distinguished guests the following day who came to welcome Amma were the king of Kozhikode, Samutiri Raja, and the renowned Malayalam writer, P. Valsala.

Amma distributed vegetable seeds to emphasize the importance of cultivating personal organic vegetable gardens. Amma expressed that she was very happy to see Amrita Vidyalayam students bringing produce they had grown in their schools.

A group of youths from neighboring villages stood with Amma on the stage and recited a pledge promising to never drink alcohol or take any intoxicants, and to make their village alcohol-free. 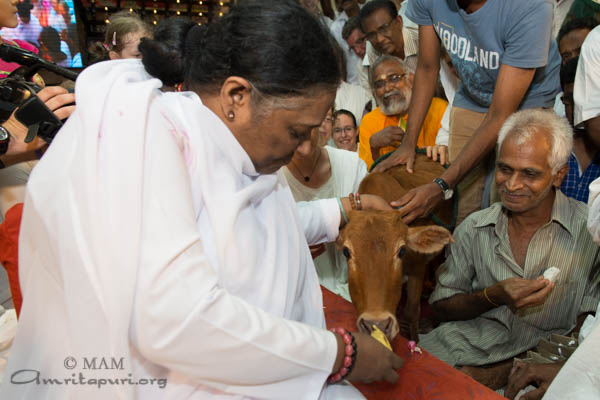 Amma also received another very special guest: a Guinness Book of World’s Records record holder for being the world’s smallest cow, Manikyam was brought for Amma’s darshan. Manikyam is a Vechoor cow, an endangered breed native to Kerala. Amma playfully held out a banana in front of Manikyam and as she tried to bite the banana, Amma held it just a little further away so the cow had to reach again and again. For several years, Amma has been encouraging the protection of the Vechoor and other endangered breeds of cows by having them bred and raised in Amritapuri. 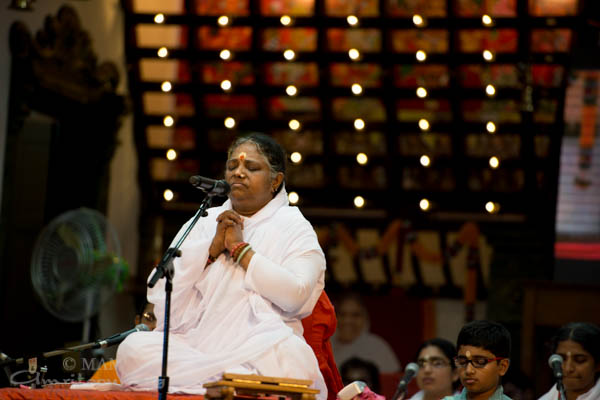 Aikyam, a four year old devotee from France, has had an intense devotion towards Amma ever since he was a baby. Already at two years old, whenever the arati was being performed in front of Amma, from his mother’s arms, he would wave an imaginary arati plate and ring an imaginary bell to the Arati bhajan. At three he began to exhibit extraordinary musical talent singing Amma’s bhajans…

Now he was leaving with his parents from Kozhikode that night. He was very sad, and was crying during Amma’s program. Before leaving, Aikyam wrote Amma a letter: “France is not my home; my home is in India. My heart is here in India with Amma, and only my body is going to France.”

At the end of darshan Amma sang the new bhajan ‘Mariyamma’. The devotees poured their hearts out to Amma in this bhakti packed call and response bhajan.

As Amma left Kozhikode after two days of programs Aikyam’s feeling could be seen in the eyes of the devotees as they gazed upon Amma for a final time. “Only our bodies are staying here, Amma… our hearts are always with you.”