Amma held the first program of her 2015 North Indian Tour in the ancient town of Kodungalloor. Here the first Bramasthanam Temple was consecrated, as well as the first Amrita Vidyalayam, Amma’s primary and secondary school. The design of the Bramasthanam temple here is unique as it is the only one with a stupa, or flag post. 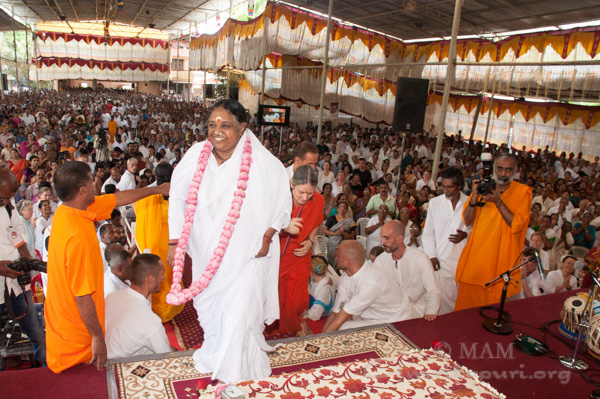 Hundreds of devotees welcomed Amma on her arrival from Amritapuri, after which Amma served a prasad dinner to one and all.
One devotee told Amma that he no longer feels as connected to Amma because in the early days when he first met Amma, five archanas were held daily. He complained that he could not relate to the newer songs and he said the old bhajans were better.
Amma replied that he has lost the innocent devotion that he had in his early days with Amma. She continued by saying that on the contrary, the new bhajans have very deep meanings. It is his perspective which has changed.

Amma reminds us again and again that we must kindle the childlike innocence in our heart. It’s important to maintain the attitude of a beginner, because, Amma says, only a beginner can learn.

The next day, the program grounds were packed to the brim with devotees awaiting Amma. 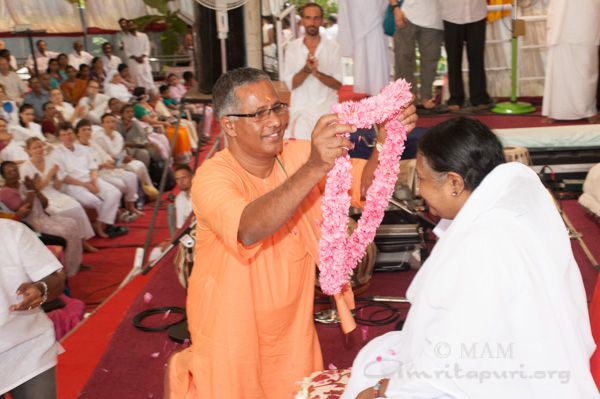 Many invited guests attended in honor of Amma; Swami Sadbhavananda of the Ramakrishna Math, Trissur, editor of Prabhuda Kerala; Bhaskaran Nair of the Kochin Devaswom Board; Shobha Surendran, member of the National BJP Council, film actress Lakshmi Priya and play back singer Gayatri.

Amma has been encouraging all the devotees to grow their own pesticide-free vegetables. To that end, as part of the program, Amma gave organic seeds for devotees to start personal vegetable gardens.

Amma also expanded the rolls of both her Amrita Nidhi pension program and Vidyamritam scholarship program.

In her satsang, Amma stressed the importance of safeguarding Nature. She asked the devotees to put a sapling along with the other offerings on their Vishu altar. On Vishu, it is the tradition that the elders of the family give their children and grandchildren pocket money. Amma said that this year, along with money, they should give the children the sapling. They should explain to the children how Nature must be respected and how trees are essential to human life. Amma stressed in both days’ satsangs the need to protect Nature and how this awareness must develop in the young or the consequences for the human race will be dire.

Gayatri, well known to the Keralaites, asked Amma’s permission to sing. A hush of excited anticipation filled the air. The international devotees, not familiar with the singer, were captivated by Gayatri’s sweet voice. Everyone was delighted by the experience.

There were many dances by the students of the Kodungalloor Amrita Vidyalayam. Later that night the older women devotees performed the traditional Kerala dance, ‘Tiruvatira’, in front of Amma while she was giving darshan. Amma expressed her happiness that the devotees are maintaining their unique cultural heritage through dance and music.

At the end of the last darshan, Amma led an ecstatic and uplifting bhajan session. The devotees were smiling in bliss as Amma left the stage at the conclusion of the Kodangalloor program. The faces of all present were shining with innocent love.