This was not Amma’s first visit to Virudunagar. She had been here just two years before and it was around midnight when she arrived then. Tonight, Amma reached here just past 8 pm. Amma was also here 30 years ago when she held a program in the Kali Amman Temple.

Amma served dinner to her children upon her arrival in the new Ashram hall. During satsang, one of Amma’s western children asked, “Everything in God’s creation is beautiful except human beings. Why is it that human beings alone are killing each other and following the path of self destruction?” 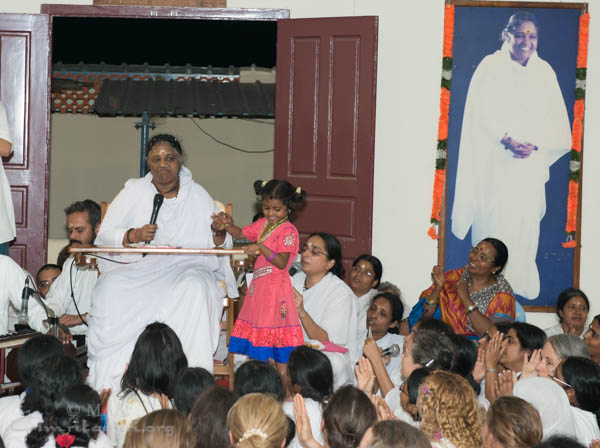 Amma started her reply with an anecdote. “Once, two people visited a rose garden. The first person was lost in the thoughts of his girlfriend. ‘How nice will it be if I offer this flower to her? How happy will she become?’ The second person felt upset upon seeing the roses. He thought, ‘How many such flowers have I offered to my girlfriend? And still she eloped with somebody else!’ He plucked the rose and trampled it under his feet.”

Amma continued, “The flowers were the same, but they gave two different experiences to two different people. That was due to the difference in their mindset. Likewise, in God’s creation, there is perfect harmony and it is the human mind that brings disharmony. It is the selfishness of human beings that has affected the harmony of the world.

“A knife can be used to stab a person, or by a doctor to save another person. Fire can be used to either burn down a house or to cook food. It depends on how we use it. Instead of blaming God for the problems that humanity encounters, let us strive and rectify our mistakes. Let us not hurl verbal abuses on our father (God). Instead of blaming, let us do whatever is possible for us to help someone. Seeing your selfless actions, your friend might feel inspired to perform selfless actions as well. Thus, selflessness spreads to others. 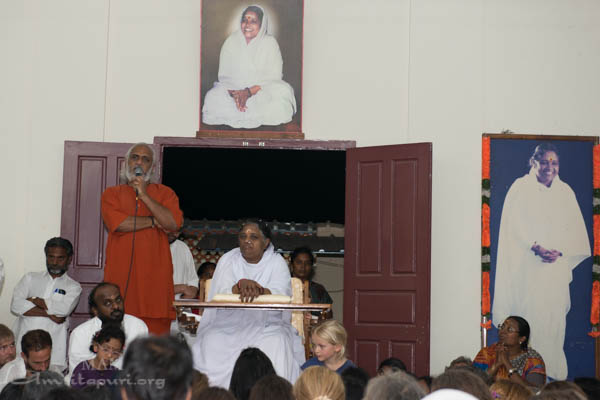 Amma next told the story of a goose that lays a golden egg every day. “The owner was greedy. He cut open the stomach of the goose to find more eggs. Human beings can be likened to the person who kills the goose out of greed for more eggs.
“Some people ask, ‘Isn’t it enough that we do charity? Is there any need to know spiritual principles and to practice these?’ Amma says, yes, it is good to do charity. But spiritual understanding is most needed. Suppose a person gives Rs.1000 to a stranger. After receiving the money, the beggar may think that this donor is so rich, so he may stab the donor at night and steal his wealth. When we give we should give with Shraddha. Even then we may be abused or derided but we have to understand that this is the nature of the world. If you have this understanding you will not be upset. Having the right spiritual understanding is what is needed the most. So merely doing charity is not enough.

“Every word, glance, touch of a person with spiritual understanding will make a difference in the world. The person with right spiritual understanding won’t try to change the external situation. Instead, he will change his inner attitude.”
Amma then narrated a story. “Once a king went hunting. He got pricked by a thorn. He called his minister and said, ‘You need to carpet the entire country by tomorrow. If you fail to do that, you will be beheaded.’ The minister knew that he couldn’t carpet the entire nation that night. He thought, ‘Anyway, I am going to die. Let me try to talk to the king.’ The next morning, he approached the king and said, ‘Instead of carpeting the entire country, why don’t you just wear shoes?’

“So, spiritual understanding helps us to change our inner attitude. We need to get involved in selfless actions constantly. If you don’t have any work to do, at least pluck grass and feed cows in your neighborhood. Instead of feeling sad about the current situation of the world, give your best and leave the rest to God.”