The 55th Birthday Celebrations of Sri Mata Amritanandamayi Devi took place today at the Amritapuri Campus of Amrita Vishwa Vidyapeetham. The celebrations attracted more than 100,000 devotees and well-wishers from all around the country and the world. The Celebrations included Amma’s pada puja and birthday satsang, as well the extension of the Mata Amritanandamayi Math’s Vidyamritam ‘scholarships for the poor’ program. They also saw the awarding of the 2008 Amrita Keerti Puraskar to noted Vedic scholar Professor R. Vasudevan Potti.

The day began at 5:00 a.m., with the performance of Maha-Ganapati Homa by Brahmasri Surya Kaladi Suryan Jayasuryan Bhatathiripad. This was followed by the chanting of the Sri Lalita Sahasranama for world peace and happiness. 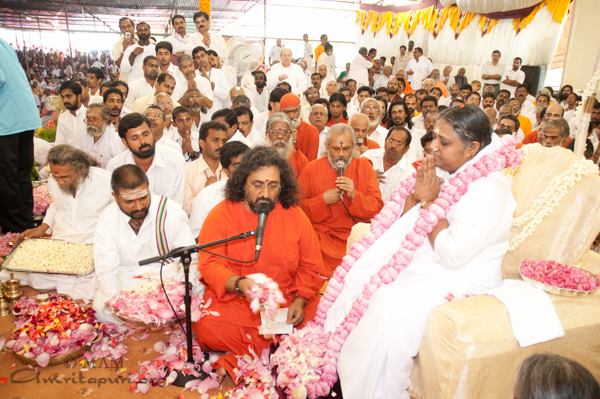 The hour prior to Amma’s arrival at the program site, Swami Amritaswarupananda shared some of stories and teachings he has gathered during his 30 years living at Amma’s side.

Amma arrived at the program site at 9:00 a.m. sharp. She was greeted to the sounds of panchavadyam and the site of students of Amrita Vishwa Vidyapeetham performing modern dance based on mohini attam.

Then Sri Guru Pada Puja was performed by Swami Amritaswarupananda to the chanting of the 108 Names of Amma and Sri Guru Stotram. This was displayed on dozens of screens throughout the massive crowd, enabling all the people to partake in the worship.

Afterwards, all of Amma’s senior disciples offered arati and garlands to Amma.

It was then that Amma delivered her annual Birthday Address.

With the conclusion of Amma’s address, commenced the official public program. This was begun with a Welcoming Address by Swami Amritaswarupananda. “For most of us, the anniversaries of our births are days when we want the world to orient back towards us,” Swamiji said. “But this is not how it is with Amma. She uses the occasion to direct everyone’s attention to the poor and suffering. We say, ‘Oh, Amma, it’s your birthday!’ and Amma says ‘Think of the farmer’s committing suicide. Think of those in Bihar without food and shelter. Think of the depressed and lonely.’ It is a teaching: Birth—true birth—takes place only when we place others before ourselves. This is Amma’s message. Take the whole world into your heart and become free.” 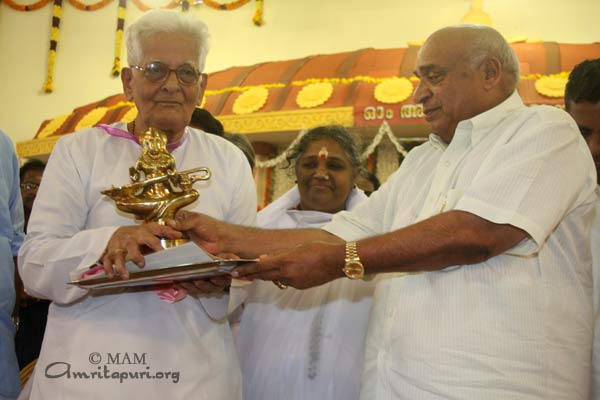 The first official function was the awarding of the 2008 Amrita Keerti Puraskar. The award was bestowed upon Prof. R. Vasudevan Potti for his contributions to Vedic knowledge and his fostering of Sanskrit. The award was given to Prof. Potti by Veerendra Kumar, MP, the Managing Editor of Mathrubhoomi. Addressing the gathering, Veerendra Kumar said, “The touch of Amma’s feet has served the people more than the Government. … When love is a commodity for trade, Amma is an ocean of love offering unlimited love to one and all.” He also praised Prof. Potti saying, “Vasudevan Potti’s entire life has been dedicated to the treasure trove that is Sanskrit.” Accepting the award, Professor Potti said, “I have received many awards during my life. But as this one comes from the embodiment of motherly love and compassion, I consider it the greatest of them all.”

The next event was the extension of the Ashram’s Vidyamritam program, the ‘scholarships for the poor’ program initiated during Amma’s 54th birthday celebrations. Originally, the program called for 30,000 scholarships for children living beneath the poverty line. Today it was extended to include 100,000 such children. Some 6,000 new beneficiaries made the trip to Amritapuri to receive their scholarships from Amma. As part of the public program, 30 of these took the dais. Amma blessed each child and presented their scholarships with the assistance of the Union Minister of State for Surface Transport K.H. Muniyappa, Minister of Food & Civil Supplies C. Divakaran, Dr. K.S. Manoj MP and Vijay Jadhav MLA. The rest of the children received their scholarships during the public darshan that followed.

Addressing the gathering, K.H. Muniyappa praised Amma’s humanitarian works, saying that “Amazingly Amma is doing even more than the Government for the poor and needy.”

This was followed by a short talk by C. Divakaran in which he similarly praised Amma, saying, “For the suffering and poor Amma is a boon. So I am offering all my best wishes to her today. … The State Government is so proud of Amma and her activities. We will always be willing to do whatever we can to assist her in seeing them through.”

In order to commemorate the occasion of Amma’s 55th birthday, the Indian Postal Depart released a First-Day Cover depicting Amma and Permanent Pictorial Cancellation of Mata Amritanandamayi Math. The official release of these was the next even of the program, with Raveendran Pillai, Postal Service Superintendent presenting the First-Day Cover and Permanent Pictorial Cancellation to Swami Purnamritananda Puri, the General Secretary of Mata Amritanandamayi Math.

The next phase of the program was the releasing of new books published by the Ashram. The first of these was Gitamritam, a collection of talks by Swami Kaivalyananda delivered the ashramites of Amritapuri on the Bhagavad-Gita. This book was officially released by Swami Prananavananda Tirtha Padar of Tirtha Padar Ashram. The first copy was given to the 2001 Amrita Keerti Puraskar recipient Acharya Narendra Bhushan.

This was followed by the release of 25 new books, all released as part of the beginning of the 25th anniversary celebrations of Matruvani, the spiritual magazine published by the Ashram. These 25 books, which compile talks of Amma and articles by senior disciples, were released in bunches of five. The first five titles were released by K. Raghupati Bhat, MLA (Udupi, Karnataka) to famed director Srikumaran Tampi. The second five were released by Rajan Babu, former MLA, and given to poet and 2005 Amrita Keerti Puraskar recipient Narayana Kurup. The third batch was given by N. Ramakrishan, MLA (Kampam, Theni, Tamil Nadu) to former Union Minister O. Rajagopal. The fourth batch was released by former Kerala State Minister Kadavoor Sivadasan to Vijay Jadhav, MLA. And the final five were released by former Kerala State Minister C.V. Padmarajan to Dinakaran, former MLA and Divara Sabha General Secretary.

Next two more publications were released. The first was a book by Swami Poornamritananda titled Unforgettable Experiences, which comprises a lifetime of experiences and teachings learned while living as Amma’s disciple. This was released with Veerendra Kumar, MP, giving the first copy to Prof. R. Vasudevan Potti. This was followed by the release of the Matruvani Birthday Supplement commemorating the 55th Birthday Celebrations of Amma, which was released by Swami Prakashananda, Chairman of Sri Narayana Guru Dharma Sangha, giving the first copy to Sajan Vargheese, Managing Director of the daily Mangalam. 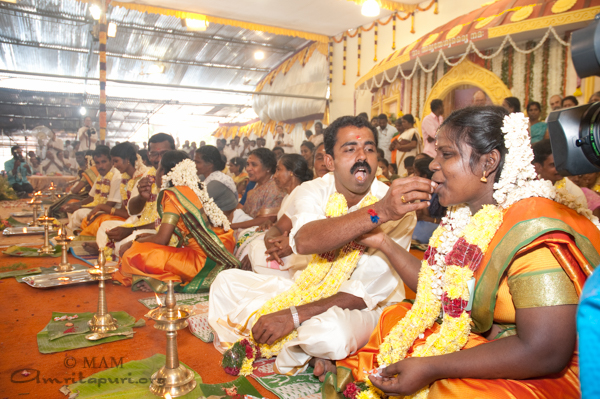 After the completion of all the book releases, students from Amrita Vishwa Vidyapeetham and Amrita Vidyalayam presented Amma with funds they had gathered for the Ashram’s Bihar Flood Relief & Rehabilitation Project.

As is tradition on Amma’s birthday, the public function concluded with the mass wedding of 56 people, with the Ashram providing them with the traditional clothing and gold ornaments.

Students of Amrita educational institutions performed many dances during Amma’s darshan, in addition to performances offered by Amma’s international devotees and traditional enthusiastic dancing by the Badugas from the Ooty area. The bhajan sessions were led by Swami Amritaswaroopananda, Swami Pranavamritananda, Swami Amritatmananda and Swami Amritageethananda.

Darshan ended at 9am in the morning of Sunday. Amma was on stage for 24 full hours… without a break!