Last year during Amma’s visit to Granollers, Amma offered to sponsor children from underprivileged families through Embracing the World.

Granollers Mayor Josep Mayoral accepted the donation from Amma on behalf of “Friends of Children Granollers”, who used it to make sure 49 children received equal opportunities in basic, artistic and sports training. 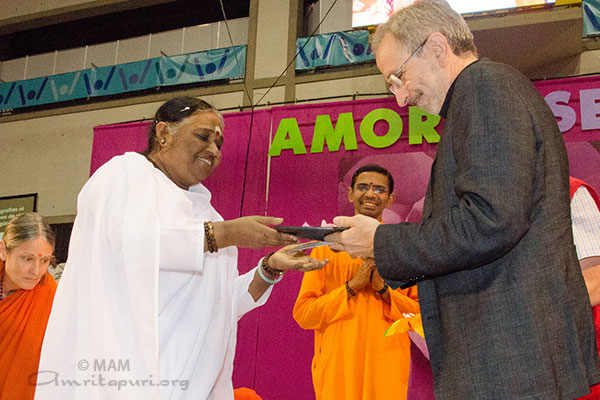 This year the Mayor, accompanied by the Councillor for Social Services, María del Mar Sánchez and the official in charge of this project, Jordi Ponce, attended the donation ceremony which was held at the start of darshan in the afternoon of October 8 in Granollers, Barcelona to an audience of several thousand.

The donation will provide another year of aid for 50 local children who are unable to afford school transportation and cafeteria, medical care, or arts and sports activities. Mr. Mayoral expressed his gratitude to Embracing the World’s effort to help underprivileged children in his hometown.