Amma was presented with the Pandit Karuppan Award at her program in Kochi today. The award was presented by Moopil Swamiyar Shankarananda Brahmananda Bhooti, the spiritual head of the Trissur Brahmaswom Matham, an Ashram in the lineage of Adi Sankaracharya dedicated to the propagation of Vedic knowledge. The award was given to Amma for her dedication, sacrifice and outstanding contributions to society. 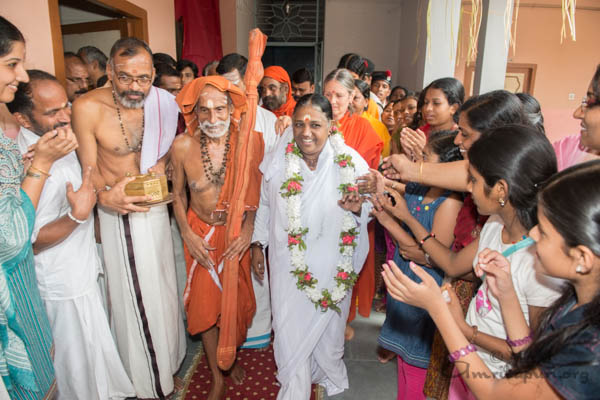 The award is given by Pandit Karuppan Vichara Vedi, an organization named for Pandit Karuppan, a 20th century poet, Sanskrit scholar and social reformer. Hailing from the fishing community, Karuppan is considered the first human rights activist of his era. He fought successfully on behalf of the so-called untouchables, dedicating his life for their empowerment, education, and protection under the law. It is a tribute to the success of his legacy that the Brahmin community have elected to present an award in his name. In presenting the award to Amma – herself not belonging to any lineage and hailing from what has been historically viewed as a low caste – the Brahmin community is indicating its acceptance of the principle that divinity is inherent in all human beings, regardless of caste or gender.

Amma graciously accepted the award, humbly offering it to her children. The award was accompanied by a cash prize, which Amma returned to the Pandit Karuppan Vichara Vedi, asking them to use it to continue their work for society. 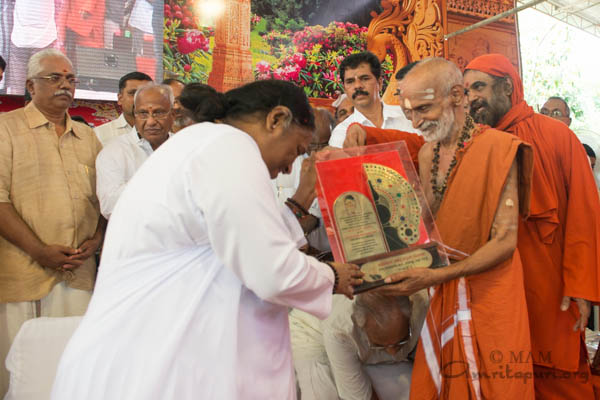 Official guests who were on hand for the presentation of the award also included Brahmasri Raman Namboodiripad and Brahmasri Narayanan Bhattatiripad, renowned experts in Samaveda and Rig Veda, respectively and the organisers of Pandit Karuppan Vichara Vedi.

On this occasion, Amma also blessed the release of a new book on the life and work of Pandit Karuppan.

As late renowned Kerala poet K.V. Dev said, “This is a country where people have misused caste and religion, hurling thorns at one another over the ages. Even today, that situation prevails. But my Amma is challenging that society with her love.”