The Palau d’Esports in Granollers, the city situated in the outskirts of Barcelona, was the venue of Amma’s program in Spain held from November 13 to 15. Amma was accorded a grand welcome by hundreds of her Spanish children as she reached the venue, with the chanting of the chant “Ma Ma Ma…Jai Jai Ma Ma Ma” The sports venue was overflowing with people on all three days, and the patience of the Spaniards was amazing as they were ready to wait for hours to get a chance to meet Amma. 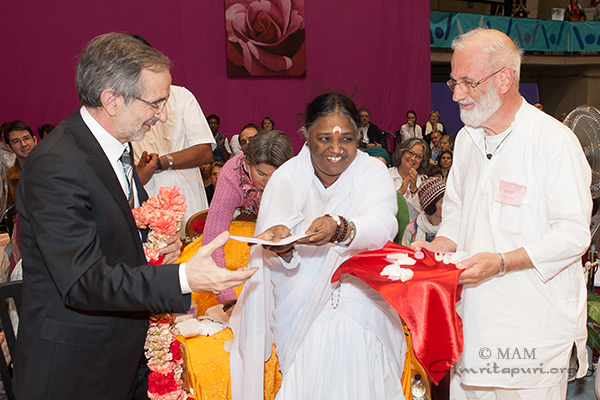 On the first day, Amma was officially welcomed to Spain by Mr. Enric Vendrell, the Director General of Religious Affairs for the state of Catalunya, and by Mr. Josep Mayoral, the honorable Mayor of Granollers. On the third day of the program, taking into consideration the economic crisis of the country, Embracing the World made a contribution towards the Mayor’s fund to support poor school children in Granollers with food, amenities and psychological care. The check was handed over by Amma to Mayor Mayural. Speaking on the occasion, the Honorable Mayor thanked Amma and the organization for its kind gesture and mentioned about the different initiatives launched by the administration to take care of the people suffering due to the economic crisis.

As Barcelona was the last program of the tour, people from all parts of Europe made their way to see Amma.  On the final evening, not only was every seat in the huge sports complex occupied but lines extended far outside the venue as well. Speaking during the ritual for world peace, Amma said, “When we view the world with an open heart, we will be able to understand that everything is unique. A sculptor creates statues from both large stones and small stones. A sculptor never sees the ugliness in a stone; he only sees its true hidden form. When we view the world from our heart, we forget ourselves; we forget our individuality; we give more importance to others. We all have the same abilities hidden within; we just need to awaken them.”

There was a feast of cultural programs on all the three days, which included  Basque folk songs, piano recitals, a Gospel choir group, songs in Portuguese and Hebrew by groups from Portugal and Israel, and the inspired singing of devotional songs by the satsang groups from all over Spain. The whole hall was vibrant with joy and spiritual fervor all the time. The marathon darshan on the final day went on till 11 am the next day and as Amma got up from her seat, one could see hundreds of eyes moist with tears from the thought of missing her till the next time that they are in Amma’s presence. The shouts of “Gracias Amma” (Thank you Amma) and “Amma, te queremos” (Amma, we love you) filled the hall as Amma was walking out of the venue. She stopped on the way, playing with children, consoling those in wheelchairs, wiping the tears of some, patting the heads of some, and clapping hands with others.

What an amazing tour it has been! Such grace to witness this divine ocean of Love flooding the continent of Europe with peace and harmony. From here Amma will travel to the United States to conduct programs in California and Michigan.